The Burwells (known as the Burls among Virginians) were among the First Families of Virginia in the Colony of Virginia. John Quincy Adams once described the Burwells as typical Virginia aristocrats of their period: forthright, bland, somewhat imperious and politically simplistic by Adams' standards. In 1713, so many Burwells had intermarried with the Virginia political elite that Governor Spotswood complained that " the greater part of the present Council are related to the Family of Burwells...there will be no less than seven so near related that they will go off the Bench whenever a Cause of the Burwells come to be tried."

The family was closely associated with the Fairfield Plantation in Gloucester County, Virginia, but several Burwells also built and operated other Virginia and North Carolina plantations, some buildings of which survive today and are on the National Register of Historic Places. Lewis Burwell III built Kingsmill Plantation's manor house beginning in the 1730s. A few years later, Carter Burwell built Carter's Grove immediately to the east in what became the modern-day Grove Community. Nathaniel Burwell built Carter Hall circa 1795 in eastern Frederick County, Virginia on the approach to the Shenandoah Valley. Place names deriving from the Tidewater aristocrats include Burwell's Bay in Isle of Wight County, Virginia.

While patriot Burwells served in the American Revolutionary War and War of 1812, and many Burwells served in the Virginia House of Delegates until the constitutional revision of 1850, the only politically significant Burwell of the post-Civil War period was Armistead Burwell, a former Confederate officer who became a North Carolina state senator and associate justice of that state's Supreme Court. The most militarily significant member of the family served in the 20th century: Lewis Burwell Puller, (a.k.a. Chesty Puller) from West Point, Virginia became a war hero and Lieutenant General of the U.S. Marine Corps.

He resided at King's Creek, York Co., Virginia. He resided at Carter's Creek, Gloucester Co., Virginia. He was a governor of the College of William and Mary in 1702. He was a member of Council between 1702 and 1711 at Virginia. he died c. 1710. He is the namesake of "Burwell's Bay" in Isle of Wight County This bay was originally called Warascoyack Bay (alternatively spelled Warrasqueak, Warrosquyoake, Warraskoyack, after Warrosquyoake Shire, the original name for Isle of Wight County) until Burwell acquired significant land upon its shores.

Known children of Hon. Lewis Burwell and Abigail Smith were as follows:

Known children of Hon. Lewis Burwell and Martha Lear were as follows:

Lewis Burwell; (unknown – November 19, 1743) m. Elizabeth Armistead, the sister-in-law of his half-brother James Burwell. In the mid-1730s, British Colonel Lewis Burwell III established a 1,400-acre (5.7 km2) plantation which he named Kingsmill Plantation. It included a mansion, outbuildings and garden. He was the colonial customs inspector for the upper James River. Along the river, Burwell's Landing, site of his inspection station, also featured a tavern, storehouse, warehouse, and ferry house. Quarterpath Road extended between Burwell's Landing and Williamsburg. 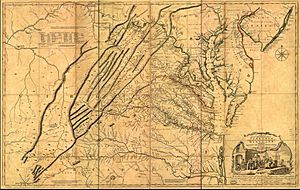 During his year as president, the General Assembly never met, but Burwell I/II did commission the Fry-Jefferson map of Virginia.

Lewis Burwell, often referred to as President Lewis Burwell (because he served as president/acting Governor of Virginia for a year November 1750 – 1751). His mother was Elizabeth Carter (making King Carter his maternal grandfather) and he was the oldest son of Nathaniel Burwell (1681–1721) (his paternal grandfather was Lewis Burwell II (1652 - c. 1710) ). Shortly after his father's death in 1721 he was sent to school in England. He returned quickly upon hearing of King Carter's death in 1732 and assumed the role of plantation owner and politician (serving in the House of Burgesses (1742) on behalf of Gloucester County. Within five years of his return he had married Mary Willis, the daughter of a wealthy neighbor, and joined their two estates into a massive 7000 acre plantation. He and Mary Willis resided in 'Whitemarsh', Gloucester Co., VA. Quickly rising among his peers, he was named to the governor's council (1743–1756). He became acting governor of Virginia on Thomas Lee's death (November 14, 1750), and remained such till the arrival of Governor Dinwiddie (November 20, 1751). During his year as president, the General Assembly never met, but Burwell did commission the Fry-Jefferson map of Virginia. Ill health limited his role in later years, and he died in 1756.

Colonel Nathaniel Burwell (1750–1814) moved to Carter's Grove in 1771 and raised corn and wheat. Nathaniel Burwell married Susanna Grymes (1752–1788) on November 28, 1772. He later moved to Carter Hall (Millwood, Virginia). He was buried in the cemetery at Old Chapel. George Burwell (1799–1873) inherited the Carter Hall estate in 1814 and added the large portico, which is "by tradition" ascribed to a design of William Thornton, architect of the United States Capitol.

Carter's Grove remained in the Burwell family until 1838.

Fairfield was first patented by Lewis Burwell I on June 12, 1648. Lewis Burwell I and his family moved to Gloucester (from nearby York County) some time before 1651. The size of the plantation and the slave population grew in tandem at the end of the seventeenth century as Lewis Burwell II inherited land, political connections, and slaves from relatives and business associates. Lewis II took sole control of the property after his mother's death in 1677. As a tobacco plantation and focal point for trade along Carter's Creek, Fairfield was profitable and perfectly situated in a fast-growing county just over a half day's travel from the new capital of Williamsburg. Fairfield reached its apex as a prominent Virginia home and plantation during the first half of the eighteenth century. The land was managed by five different people over that time, but all were focused on maintaining the agricultural profitability of the plantation while experimenting with crop diversification and introducing large scale cattle and animal husbandry. By the end of the century, though, the Burwell family was overwhelmed by debt. The plantation's enslaved population adapted to their new roles in the fields and around the manor house, but many were sold to plantations in the west and south. As surrounding tracts were sold to pay creditors, Fairfield shrank, consolidating the remaining labor force on a much smaller parcel surrounding the manor house. Little is known about the fate of Fairfield's slaves when the plantation was sold in 1787, although some were purchased by neighbors and may have remained in the area.

All content from Kiddle encyclopedia articles (including the article images and facts) can be freely used under Attribution-ShareAlike license, unless stated otherwise. Cite this article:
Burwell family of Virginia Facts for Kids. Kiddle Encyclopedia.