Butt of Lewis facts for kids 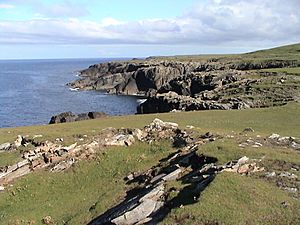 The Butt of Lewis (Scottish Gaelic: Rubha Robhanais) is the most northerly point of Lewis in the Outer Hebrides. The headland, which lies in the North Atlantic, is frequently battered by heavy swells and storms and is marked by the Butt of Lewis Lighthouse. The nearest populated area is the village of Eoropie, about 1 mile (1.5 kilometres) to the south.

The road to the lighthouse passes a sheltered cove called Port Stoth. Agricultural lazy beds are also visible along the coast. The Butt of Lewis features some of the oldest rocks in Europe, having been formed in the Precambrian supereon up to 3000 million years ago. Southwest from the lighthouse is a natural arch called the "Eye of the Butt" (Scottish Gaelic: Sùil an Rubha), best viewed from the Habost machair.

All content from Kiddle encyclopedia articles (including the article images and facts) can be freely used under Attribution-ShareAlike license, unless stated otherwise. Cite this article:
Butt of Lewis Facts for Kids. Kiddle Encyclopedia.