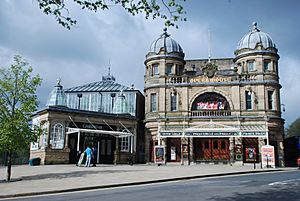 Detail above the entrance 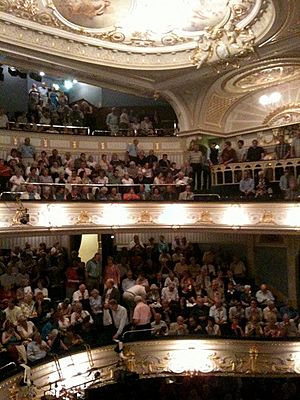 Upper tiers in the house

Buxton Opera House is in The Square, Buxton, Derbyshire, England. It is a 902-seat opera house that hosts the annual Buxton Festival and, from 1994 to 2013, the International Gilbert and Sullivan Festival, among others, as well as pantomime at Christmas, musicals and other entertainments year-round. Hosting live performances until 1927, the theatre then was used mostly as a cinema until 1976. In 1979, it was refurbished and reopened as a venue for live performance.

The Buxton Opera House was built in 1903 and designed by Frank Matcham, one of Britain's finest theatre architects. He also designed a number of famous London theatres, including the London Palladium (1910) and the London Coliseum (1904). The Opera House ran as a successful theatre, receiving touring companies until 1927, when it was turned into a cinema. Silent films were shown until 1932 when the theatre was wired for sound and could present ‘talkies’. The Opera House also became the venue for an annual summer theatre festival from 1936 to 1942, two of them in conjunction with Lillian Bayliss and her London-based Old Vic company.

After the Second World War, the theatre continued to serve primarily as a cinema. The building was designated a Grade II* listed building in 1970. The Opera House gradually fell into disrepair. In 1976, it was closed and rumours circulated that it would never reopen. 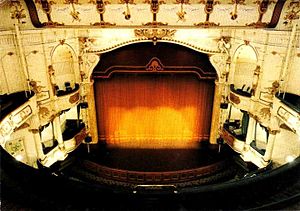 In 1979, the building was restored, and an orchestra pit was added to the original Matcham design. Since then, the Opera House has been a full-time venue for stage productions, presenting approximately 450 performances per year, including opera, dance, musical theatre, pantomime, comedy, drama, children's shows and concerts. The theatre is staffed by a small full-time technical crew for all the backstage work, setting up all the shows and artists that appear. Volunteers from the local community are also employed for front-of-house duties including bar work and as ushers.

By the 1990s, more work was needed to repair and modernise the theatre, and from 1999 to 2001 an extensive programme of internal and external restoration took place. In February 2007, another refurbishment was completed at the Opera House that saw the installation of air conditioning in the gallery and backstage area, new seats in the gallery and upper circle, a new get-in lift to replace the ramp and new backstage working lights as well as re-wiring and painting the backstage area and dressing rooms. The current capacity is 902 seats.

In 2011, FT Magazine featured an article on opera house design. The writer praised the European opera houses "designed by the Viennese architectural firm of Fellner and Helmer (the Zurich Opera House is [an] example) ... [which] represent a near-ideal marriage of size, acoustic and decorative beauty. Their British equivalents are those designed by Frank Matcham – best of all the Buxton Opera House." In 2014, the opera house's former finance chief was jailed for two years for stealing nearly £250,000 from the opera house accounts in 2012 and 2013.

The theatre complex also includes the adjacent Victorian Pavilion, the 369-seat Pavilion Arts Centre (rebuilt in 2010; formerly the Paxton Theatre and earlier known as the Playhouse Theatre and The Hippodrome). There the Literary and Dramatic Societies of Buxton College and Cavendish Grammar School staged annual performances of either Shakespeare, such as Hamlet (1966), Coriolanus (1968) and Macbeth (1970), or modern works, such as Bertold Brecht's Life of Galileo (1967) and Dylan Thomas's The Doctor & the Devils (1969). It also includes the Octagon Hall auditorium (built in 1875), as well as a two-storey restaurant with a bar and gift shop. The arts centre stage area can be converted into a separate 93-seat studio theatre.

Since July 1979, the Opera House and theatre complex has been home to the Buxton Festival, which runs for about two weeks in mid-July and has developed into one of Britain's largest opera-based festivals. Typically, it includes a Handel opera (with conductors such as Harry Christophers) and other rarely seen operas as well as more popular classics. Running alongside it is the Buxton Festival Fringe. It is popular as a warm-up for the Edinburgh Fringe, and it now claims to be the largest 'true' fringe festival in the UK. From 1994 to 2013, the Opera House also hosted the annual three-week-long International Gilbert and Sullivan Festival, attracting audiences from all over the UK and from abroad. The Gilbert and Sullivan Festival now spends one week in Buxton each year before moving to Harrogate.

The Opera House presents over 400 performances each year. From 2004 to 2013, the Opera House hosted the annual Four Four Time music festival which saw a wide variety of musical performances over ten days each February. Performers for the 2008 festival included Marc Almond, Richard Hawley, The Stranglers and Boy George.

All content from Kiddle encyclopedia articles (including the article images and facts) can be freely used under Attribution-ShareAlike license, unless stated otherwise. Cite this article:
Buxton Opera House Facts for Kids. Kiddle Encyclopedia.