Byron is a census designated place (CDP) in Contra Costa County, California, United States. The population was 1,277 at the 2010 census. 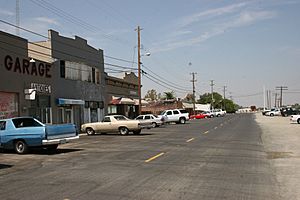 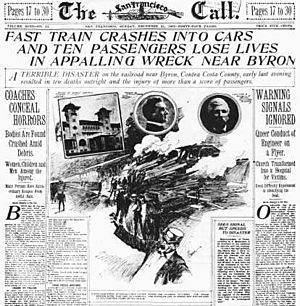 According to the United States Census Bureau, the CDP has a total area of 6.5 square miles (17 km2), all of it land. It is located 5.5 miles (9 km) southeast of Brentwood.

This region experiences warm (but not hot) and dry summers, with no average monthly temperatures above 71.6 °F. Byron is windy, and dust devils sometimes appear. According to the Köppen Climate Classification system, Byron has a warm-summer Mediterranean climate, abbreviated "Csb" on climate maps.

Byron's first post office opened in 1878. Byron is named after an employee of the railroad. 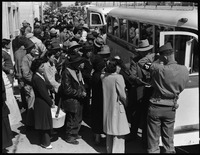 Families of Japanese ancestry being removed from Byron, California during World War II.

In 1942, all of the town's residents of Japanese descent were forcibly removed by the US government with pressure from California agricultural interests and taken to Turlock assembly center.

There were 286 households out of which 36.4% had children under the age of 18 living with them, 53.8% were married couples living together, 11.5% had a female householder with no husband present, and 28.7% were non-families. 22.0% of all households were made up of individuals and 9.8% had someone living alone who was 65 years of age or older. The average household size was 2.85 and the average family size was 3.36.

In 1938 the resort closed, after a series of lawsuits that were probably brought about by the Great Depression, but was leased by the government in 1941 and became a military interrogation camp housing both German and Japanese prisoners of war, known as Camp Tracy, until 1945, when orders were sent to dismantle it. Additional information about its usage during World War II can be found in the book, The History of Camp Tracy: Japanese WWII POWs and the Future of Strategic Interrogation.

In 1947 the Byron Hot Springs property was put up for sale and purchased by the Greek Orthodox Church for a sum of $105,000. It served as the Monastery St. Paul for several years. It then changed hands several times as a resort, country club and private residence. It is currently privately owned by a developer who hopes to begin restoring the resort in early 2009, but the property is now in a state of disrepair. Plans for the restoration of Byron Hot Springs are outlined at byronhotsprings.com.

In 2005, a Victorian-era carriage house on the property was burned to the ground. The hotel itself sustained some fire damage, but still stands.

The site has most recently attracted graffiti artists, urban explorers, and photographers. The site has notably been used as the set of national Bay Area rap artist Mars for various projects including his Zodiac Tour commercial, and an interview with Insane Clown Posse on their Weekly Freakly Weekly internet news show. DJ Clay, who is also the DJ for Insane Clown Posse, shot parts of his music video for his single "Pen & Paper" here.

In 1993 Contra Costa County broke ground on a new airport two miles (3 km) south of Byron. On October 8, 1994, Byron Airport was dedicated. The new airport has 1,307 acres (5.29 km2) of land. 814 acres (3.29 km2) are reserved for habitat management land for the San Joaquin kit fox, a federally listed endangered species, as well as many other endangered and special status species. The airport is also the home airport of the Patriots Jet Team. Has also been used for illegal drag races in the past.

There is limited bus service to Byron by Tri-Delta Transit's route 386, which connects the community and Discovery Bay with the Brentwood Park and Ride Lot where passengers may transfer to buses connecting to other cities in the region in addition to Pittsburg/Bay Point (BART station) and Brentwood Dimes-A-Ride transit.

All content from Kiddle encyclopedia articles (including the article images and facts) can be freely used under Attribution-ShareAlike license, unless stated otherwise. Cite this article:
Byron, California Facts for Kids. Kiddle Encyclopedia.