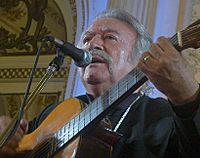 César Isella (20 October 1938 – 28 January 2021) was an Argentinian folk singer-songwriter and guitarist. He played for Los Fronterizos from 1956 to 1966. He also wrote "Canción con todos", which is thought to be the Latin American anthem. He was born in Salta, Argentina.

All content from Kiddle encyclopedia articles (including the article images and facts) can be freely used under Attribution-ShareAlike license, unless stated otherwise. Cite this article:
César Isella Facts for Kids. Kiddle Encyclopedia.