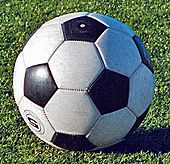 Early footballs began as animal bladders or stomachs that would easily fall apart if kicked too much. Improvements became possible in the 19th century with the introduction of rubber and discoveries of vulcanization by Charles Goodyear. The modern 32-panel ball design was developed in 1962 by Eigil Nielsen, and technological research continues today to develop footballs with improved performance. The 32-panel ball design was soon overcome by 24-panel balls as well as 42-panel balls, both of which improved performance compared to before, in 2007.

A black-and-white patterned spherical truncated icosahedron design, brought to prominence by the Adidas Telstar, has become an icon of the sport. Many different designs of balls exist, varying both in appearance and physical characteristics.

Today's footballs are much more complex than past footballs. Most modern footballs consist of twelve regular pentagonal and twenty regular hexagonal panels positioned in a truncated icosahedron spherical geometry. Some premium-grade 32-panel balls use non-regular polygons to give a closer approximation to sphericality. The inside of the football is made up of a latex or butyl rubber bladder which enables the football to be pressurised. The ball's outside is made of leather, synthetic leather, polyurethane or PVC panels. The surface can be textured, weaved or embossed for greater control and touch. The panel pairs are either machine-stitched, hand-stitched or thermo-bonded (glued and bonded by heat) along the edge. To prevent water absorption balls may be specially coated, or the stitches bonded with glue. The size of a football is roughly 22 cm (8.66 inches) in diameter for a regulation size 5 ball. Rules state that a size 5 ball must be 68 to 70 cm (27 to 28 in) in circumference. Averaging that to 69 cm (27 in) and then dividing by π gives about 22 cm (8.7 in) for a diameter. 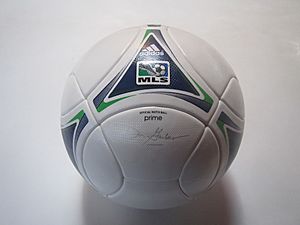 Many companies throughout the world produce footballs. The earliest balls were made by local suppliers where the game was played. It is estimated that 55% of all footballs are made in Sialkot, Pakistan, with other major producers being China and India.

As a response to the problems with the balls in the 1962 FIFA World Cup, Adidas created the Adidas Santiago – this led to Adidas winning the contract to supply the match balls for all official FIFA and UEFA matches, which they have held since the 1970s, and also for the Olympic Games. They also supply the ball for the UEFA Champions League which is called the Adidas Finale.

In early FIFA World Cups, match balls were mostly provided by the hosts from local suppliers. Records indicate a variety of models being used within individual tournaments and even, on some occasions, individual games. Over time, FIFA took more control over the choice of ball used. Since 1970 Adidas have supplied official match balls for every tournament.

The following lists the most up-to-date balls used in various club football competitions (as of 2020-21 season):

The association football symbol (Error using : Input "26BD" is not a hexadecimal value.) was introduced by computing standard Unicode. The symbol was representable in HTML as &#9917; or &#x26BD;. The addition of this symbol follows a 2008 proposal by Karl Pentzlin.

All content from Kiddle encyclopedia articles (including the article images and facts) can be freely used under Attribution-ShareAlike license, unless stated otherwise. Cite this article:
Ball (association football) Facts for Kids. Kiddle Encyclopedia.