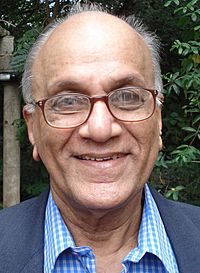 Conjeevaram Srirangachari Seshadri FRS (29 February 1932 – 17 July 2020) was an Indian mathematician. He was the founder and Director-Emeritus of the Chennai Mathematical Institute. He was known for his work in algebraic geometry. The Seshadri constant is named after him. He was a recipient of the Padma Bhushan in 2009, the third highest civilian honor in the country.

All content from Kiddle encyclopedia articles (including the article images and facts) can be freely used under Attribution-ShareAlike license, unless stated otherwise. Cite this article:
C. S. Seshadri Facts for Kids. Kiddle Encyclopedia.