The CBC Museum was dedicated to the preserving the physical heritage and archival materials relating to the history of the Canadian Broadcasting Corporation (CBC). It was located in the Canadian Broadcasting Centre at 250 Front Street  West, Toronto, Ontario, Canada. The museum collection began by at least 1960, the current display space opened in 1994, and closed on December 22, 2017.

The museum featured a number of interactive exhibits where people can call up excerpts from famous CBC television shows, including children's series, news and sport events.

"The men in the promotion department" at CBC assembled a museum collection by at least 1960. In 1961, The Globe and Mail mentioned a museum "at this point stored in an out-of-the-way CBC building." At the time, it included "exhibits which take broadcasting from the crystal-set stage to the transistor radio and portable TV." The majority of items were gathered from collectors. One highlight was a 1000 lbs Blattnerphone steel tape audio recorder, believed by staff to be the only complete model in North America.

Around 100,000 people in Aylmer, Ontario saw an exhibit of some of the artifacts in October 1960.

Jack Brickenden, a CBC publicist, is said to have "dreamed out loud" of establishing a museum, in the early 1970s, but network management was unenthusiastic. Nevertheless, in 1971, employee Ivan Harris is credited for founding the modern museum collection. (Harris also helped establish the Whitchurch-Stouffville Museum and York-Durham Heritage Railway.)

A museum was operated by the CBC in one of its many Toronto building for some duration of time, closing shortly before 1991. The introduction to an article about "exotic" museums in the City of Toronto noted that it was "a victim of federal cutbacks." This display wasn't mentioned in 1994 coverage of the new facility.

The 16,000 square foot museum opened as part of the corporation's larger Canadian Broadcasting Centre. Prior to its construction, the CBC was spread out in two dozen buildings in 18 locations in Toronto.

The facility was initially operated by volunteers, including retired CBC employee Ivan Harris, its curator. (Harris maintained a curatorial role as of 2002, when he was presented to Queen Elizabeth II on her visit to the building.)

The CBC sent a VIA train on a nationwide tour for their 50th anniversary in 2002, complete with artifacts on loan from the CBC Museum.

In 2017, in the wake of the Gemini Awards segment, the CBC noted on-going plans to redevelop the main floor of the Canadian Broadcasting Centre. They intended to "include displays, artifacts and information that will represent CBC's rich history, its programs and its people."

Toronto Star columnist Shawn Micallef noticed that "for years" before the closure, there were displays "falling apart" and broken monitors. The museum was named by the Toronto Star in 2011 as one of the "museums you never knew existed."

Little advanced warning was given of the closure, announced in an internal email to staff. 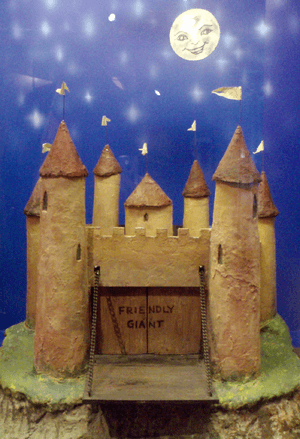 In addition, the museum has an interactive video area where clips from various documentary and news programs over the years can be viewed, as can exhibits of vintage recording equipment, cameras and microphones.

The exhibits extend beyond the museum, with Casey and Finnegan's treehouse from Mr. Dressup located across from the entrance, and additional exhibits of memorabilia and photographs in display cases around the CBC lobby.

An exhibit in the museum offered visitors to cue up news clips, circa 2002.

Outside the main gallery

The Ivan Harris Gallery was located on the lower level of the building, down a set of elevators, en route to the PATH. The space included a window into visible storage, multiple display cases, and a variety of artifacts behind stanchions. A display case of awards received by the broadcaster was located behind a set of stairs.

An exhibit about radio show The Happy Gang, including "fan letters, scrapbooks, photos and more" began in 2005.

The space was updated in 2006 by Perna Siegrist Design.

The treehouse from Mr. Dressup was added in the building lobby.

Adjacent to the museum is the Graham Spry Theatre, a 40-seat venue projects video onto a screen made to look like a giant version of a 1950s era wooden television set. It displayed a loop of selected CBC television shows. (When the space opened, it offered bench seating for 32 people.)

Shows generally rotated on a monthly basis. On opening, the area featured an eight minute rotation of clips of ballets and musicals staged by Norman Campbell. As of 2001, selections were from the 1940s to 1960s.

Selections included episodes from such series as Peppiatt & Aylesworth, The Tommy Hunter Show, The Frantics, 4 on the Floor, and The Kids in the Hall.

Plans for a pay-per-view station of old programs at the CBC Archives in spring 1995 are not believed to have materialized.

The museum was open weekdays from 9 am to 5 pm. It was closed on statutory holidays. The facility was wheelchair accessible.

Since at least 1996, large equipment has been sent to the Canada Science and Technology Museum in Ottawa.

All content from Kiddle encyclopedia articles (including the article images and facts) can be freely used under Attribution-ShareAlike license, unless stated otherwise. Cite this article:
CBC Museum Facts for Kids. Kiddle Encyclopedia.