The Canadian Broadcasting Centre, also known as the CBC Toronto Broadcast Centre, is an office and studio complex in Toronto that serves as the main broadcast and master control point for the Canadian Broadcasting Corporation's English-language television and radio services. It also contains studios for local and regional French language productions and is the headquarters of the North American Broadcasters Association. The analogous facility for CBC's French language services is Maison Radio-Canada, in Montreal, while corporate headquarters are located at the CBC Ottawa Production Centre.

The Canadian Broadcasting Centre is at 250 Front Street West in downtown Toronto, with additional entrances at 205 Wellington Street West and 25 John Street, directly across from the Metro Toronto Convention Centre. It is within walking distance of Union Station, the Rogers Centre, and the CN Tower and connected to the city's PATH underground walkway network.

The 13-storey Broadcast Complex is partly located on the site of the First Ontario Parliament Buildings (or the Third Parliament Building of Upper Canada), which stood on the block bounded by Wellington, John, Front, and Simcoe streets between 1832 and 1903. Constructed at a cost of Cdn$350 million (excluding technology renewal), the Canadian Broadcasting Centre complex entered service in 1993. Previously, the CBC's Toronto operations had been based at a smaller facility on Jarvis Street, near the former television transmitter.

Its architectural, structural and infrastructural design features eventually incorporated, among others, the emergent concepts and information technologies underlying Digital HDTV, Digital Radio Broadcast, IT platform as a "Global Information Server and MultiMedia Cloud" integrated with the Internet. The project's leading aim was much needed integration of large number of CBC employees who were located at more than 20 separate facilities throughout Toronto and modernization of the CBC corporate automation infrastructure in preparation for the 21st century.

The project required over twelve years of planning with particular emphasis (1988–90) on critical IT strategic planning, digital archives, multimedia, interactive TV, corporate office automation and high-capacity advanced corporate intranet technology design dependent on physical considerations including fibre-optics and electromagnetic interference from within and nearby sources such as the CN Tower. It took another four years for construction completion, corporate IT platforms, communication backbone, and skeletal communication structure erection and S/W applications refurbishment. Without the loss of one minute of airtime, the personnel and the systems migrated to the new facility, which was recognized to be the most advanced of its kind in the world with a minor technology challenge posed only by the CNN facilities in Atlanta, USA.

Television production is located on the upper floors (with many programs recorded in the three rooftop studios), and radio on the second and third floors. Some of the larger sound stages are rented out to outside movie, television and commercial productions, such as Global's Canadian versions of Deal or No Deal, Are You Smarter Than a 5th Grader?, YTV's Life with Boys, and a multitude of commercials for Ford, Canadian Tire, and others. 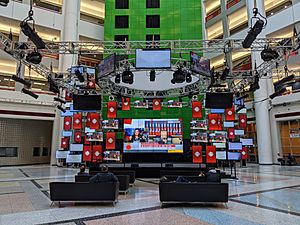 The entire structure sits on 3,000 massive hard-rubber pads to reduce unwanted noise and vibrations. For that reason, all studios are located in the core of the building. The complex also has four 1250-kilowatt Cummins generators to provide power to critical loads during a power failure. The atrium was named for Barbara Frum, a noted Canadian journalist. It is used as the venue for special broadcasts, including federal election coverage and the 2000 Today millennium special, and episodes of Canadian Antiques Roadshow. 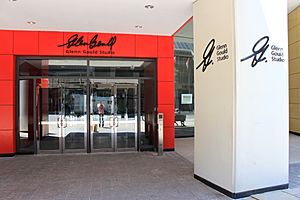 The Glenn Gould Studio is one of three radio studios at the Broadcasting Centre.

The former CBC Museum, dedicated to preserving the memories and physical artifacts of the national broadcaster's heritage, was located on the first floor of the building. Exhibits included the original "Tickle Trunk" from Mr. Dressup (Casey's treehouse from the same series is on display in the lobby just outside the entrance to the museum), a portion of the original set used for Friendly Giant, Muppet puppets from Sesame Park, video clips from numerous programs, and original sound and tape equipment. Additional exhibits of memorabilia from CBC's history are also located in other areas of the first floor. The museum closed in 2017 and its collection was transferred to Ingenium, the federal Crown corporation which operates Canada's national science and technology museums.

In 2015, the CBC announced that it intended to sell the building and lease back parts for the operation. The CBC leases large parts of the building and incurring expenses for the maintenance of the building. The role for the public broadcaster has diminished and increasing efficiency has reduced need for as many staff.

The analogous facility for CBC's French-language networks is Maison Radio-Canada in Montreal. The CBC's corporate headquarters are located in Ottawa in the CBC Ottawa Broadcast Centre.

The so-called Toronto 18 terrorists included the building in their list of targets in a 2006 Ontario terrorism plot.

In 2010, the broadcast centre was inside of the secure zone due to the 2010 G-20 Toronto summit protests and employees were not allowed to leave the building during portions of the rioting when gates into and out of the zone were locked down.

A Canadian Security Intelligence Service regional office is located on Front Street West directly across from the CBC broadcasting centre, and helped identify suspicious packages and led to the arrest of a suspect in 2011.

The CBC building in downtown Toronto had to be evacuated in November 2015 after someone taking stock of inventory in the archives stumbled upon what looked like a military shell. Police and military bomb technicians were called in and determined the shell was inert.

In 2018, a user on website incel.me called on other users to attack the CBC and shoot employees, leading to increased security and Toronto Police Service being called. 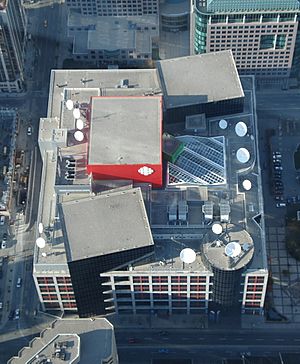 The roof of the Broadcasting Centre, as seen from the CN Tower. Studio 40 is centre, flanked by studios 41 and 42.

All content from Kiddle encyclopedia articles (including the article images and facts) can be freely used under Attribution-ShareAlike license, unless stated otherwise. Cite this article:
Canadian Broadcasting Centre Facts for Kids. Kiddle Encyclopedia.