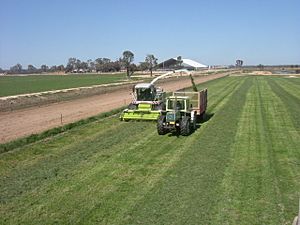 The CLAAS Jaguar is a silage harvester made by CLAAS. It has a DaimlerChrysler engine.

The CLAAS Jaguar is one of the best selling silage harvesters ever made. They sell especially well in European countries. Of the forage harvesters CLAAS sold in Ireland from 2000 to 2003, 60% were Claas Jaguars.

Before 2003, most forage harvesters operated at very slow speeds. In 2003, new technology meant that a new silage harvester, with the same look as the old model, would be built. In Autumn of that year, the CLAAS Jaguar Speedstar was first sold.

The "Green Eye" is a new addition. After four years of scientific experiments, the Green Eye was made in May 2007. The 900 model now being sold in Europe is known as the CLAAS Jaguar 900 Green Eye. The Green Eye is also available in the other models as well.

All content from Kiddle encyclopedia articles (including the article images and facts) can be freely used under Attribution-ShareAlike license, unless stated otherwise. Cite this article:
CLAAS Jaguar Facts for Kids. Kiddle Encyclopedia.