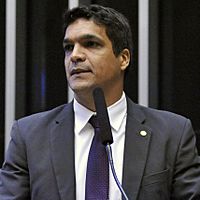 Benevenuto Daciolo Fonseca dos Santos (born 30 March 1976), known as Cabo Daciolo (Corporal Daciolo in English), is a Brazilian military firefighter and politician. He was born in Florianópolis, Santa Catarina. He is a member of Patriota (PATRI). In 2014, he was elected federal deputy from Rio de Janeiro. He wa expelled from PSOL in 2015.

On 28 March 2018, he was chosen by Patriota as pre-candidate for President of Brazil in the 2018 general election.

All content from Kiddle encyclopedia articles (including the article images and facts) can be freely used under Attribution-ShareAlike license, unless stated otherwise. Cite this article:
Cabo Daciolo Facts for Kids. Kiddle Encyclopedia.