Caja de Muertos (English: Coffin Island or Dead Man's Chest) is an uninhabited island off the southern coast of Puerto Rico, in the municipality of Ponce. The island is protected by the Reserva Natural Caja de Muertos natural reserve, because of its native turtle traffic. Hikers and beachgoers are often seen in the island, which can be reached by ferry from the La Guancha Boardwalk sector of Ponce Playa. Together with Cardona, Ratones, Morrillito, Isla del Frio, Gatas, and Isla de Jueyes, Caja de Muertos is one of seven islands ascribed to the municipality of Ponce.

In 1599, several English merchants departed to China with a letter from Queen Elizabeth to the Chinese government. However, the expedition was dangerous and a ship was lost to the weather. Off the Indian coast the group turned to piracy and after learning of a Portuguese ship filled with gold, silver, precious stones, other treasures and other valuables (spices, silk, some clothing), they attacked and captured the vessel. The fleet managed to capture another vessel, but in the process lost its flagship and a large part of the crew was fatally injured, including the fleet commander. Shorthanded, the group decided to return to England aboard a smaller ship, taking part of the loot with them. After surviving an attempted mutiny, the Englishmen decided to take a canoe left behind by a frigate off Puerto Rico's eastern coast from where they took refuge at Caja de Muertos. Losing the smaller vessel, the Englishmen traveled to the main island in search of provisions, but one of them left behind to mind the canoe was captured and let the presence of the treasure known to the local authorities.

This led to an incursion to take the treasure, where all but one of the Englishmen were suddenly executed despite negotiations and the Spanish took the treasure with them and reported it as being captured in a battle with the English. The lone survivor, named Thomas, managed to build a makeshift boat out of wood remnants and drifted to Puerto Rico, being taken to San Germán and telling his version of the events. The governor of Puerto Rico grew suspicious and an investigation was held between the autumn of 1599 and early 1600, which lead to a confession by one of the murderers. The authorities then began confiscating the treasure seized during the incursion, with other parts disappearing and reportedly ending in the hands of the governor's own nephew. The treasure confiscated was auctioned, with about 4,000 ducats of Indian silver remaining by 1602. The following governor employed another part in construction, with a collection of jewels and bars that were left behind being sold. The last piece, a large gemstone, was sent abroad for transport to Spain. From these events, the island would gain the moniker of "Isla Bestia" ("Beast Island"), in relation to an item found during this incursion that was described as "the claw of a great beast".

Caja de Muertos is located 8.4 km south of the Puerto Rican mainland and is part of the Playa barrio of Ponce, Puerto Rico, municipality.

The climate is dry and the island supports dry forest. A still-functioning lighthouse, Caja de Muertos Light, established in 1887 and automated in 1945, sits atop the highest hill on the island. This 170 feet high hill is located at the southwest extreme of the island.

The island has four beaches: Pelicano, Playa Larga, Carrucho, and Coast Guard. The island also possesses fauna and flora not found anywhere else in the world. The island has no permanent residents, but the Government of Puerto Rico maintains Department of Natural Resources staff and security personnel there. In 1899, it registered a permanent population of 64 residents, but it since declined to zero. 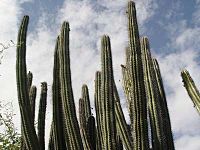 Cactus in the island's dry forest

Though there is no consensus on how the island got its name, one story given by Kurt Pitzer and Tara Stevens is that of a Portuguese pirate, Jose Almeida. A former merchant sailor, Almeida fell in love with a Basque lady in Curaçao, married her in St. Thomas, US Virgin Islands and took her pirating with him around the Caribbean. On the first raid, she was killed by a stray bullet. Distraught, Almeida had her embalmed and placed in a glass box inside a copper coffin. He buried her in a cave in a deserted island near Ponce. He would come every month to gaze over her preserved body and leave half of his treasure in her grave. Almeida, however, was caught in the Puerto Rico mainland, tried, and executed in El Morro in 1832. Many years later, a Spanish engineer discovered the glass and copper coffin, and identifying the cay on a map gave it its present name. The treasure found, if any, was kept secret.

Another possibility is that the island got its name because it resembles someone lying down when seen from the main island. Caja de Muertos can be translated into English as "Coffin" or "Dead Man's Chest". 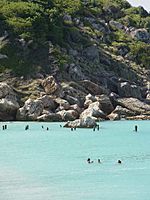 In 1901, it was suggested by one A. W. Van Buren of Yale University that the island's name may be related to the sea shanty "Dead man's chest", first written by Robert Louis Stevenson for his novel Treasure Island; however, no scholar since Van Buren has made this connection nor is there any evidence to support such a claim. Further, Van Buren says that Stevenson did not write the song "Dead man's chest" himself, that he "picked it up somewhere", which is another baseless claim (see "Dead man's chest" for more information on the fakelore surrounding this song).

The official version of the origin of the name, as given by the Puerto Rico Department of Natural Resources, and under whose care the island is currently entrusted, is as follows: "Its name is attributed to the 18th-century French writer Jean Baptist Labat who called it Coffre A’morr (Caja de Muertos), making reference to the fact that when the island is seen from certain places in southern Puerto Rico, it gives the impression of seeing a dead person laying on a plateau." 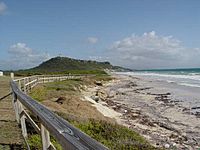 Playa Larga, above, is part of the protected area of the island

The island was designated as a nature reserve in 1980 after a meeting was held in Puerto Rico by the Puerto Rico Planning Board wherein they considered the recommendation set forth by the Coastal Management Zone Program to turn the island into a protected wilderness area. The island has remained a protected area ever since. The protection is mainly due to its heavy turtle traffic which is an endangered species.

All content from Kiddle encyclopedia articles (including the article images and facts) can be freely used under Attribution-ShareAlike license, unless stated otherwise. Cite this article:
Caja de Muertos Facts for Kids. Kiddle Encyclopedia.