Caladenia applanata subsp. applanata, commonly known as the broad-lipped spider orchid, is a species of orchid endemic to the south-west of Western Australia. It is a relatively common orchid with a single erect, hairy leaf and up to three flowers which may be red, cream, green or yellow and have a broad, flattened, red-tipped labellum. 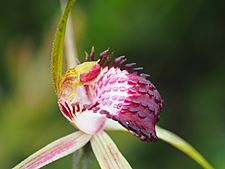 The broad-lipped spider orchid is found in low heath, often over limestone, in coastal areas between Yallingup and Albany in the Jarrah Forest and Warren biogeographic regions

Caladenia applanata subsp. applanata is classified as "not threatened" by the Western Australian Government Department of Parks and Wildlife.

All content from Kiddle encyclopedia articles (including the article images and facts) can be freely used under Attribution-ShareAlike license, unless stated otherwise. Cite this article:
Caladenia applanata subsp. applanata Facts for Kids. Kiddle Encyclopedia.