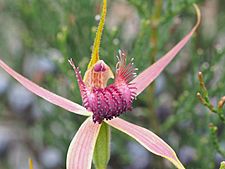 Caladenia decora is a terrestrial, perennial, deciduous, herb with an underground tuber and which grows as a solitary plant or in small clumps. It has a single, erect, linear, hairy leaf, 9–22 cm (4–9 in) long and 6–10 mm (0.2–0.4 in) wide. The leaf is pale green and has purple-red blotches near its base.

This species is similar to the similarly-sized Caladenia pectinata but is more brightly coloured, often has gland-tipped petals and has a more easterly distribution. Hybrids with Caladenia longicauda subsp. crassa are common.

Caladenia decora was first formally described by Stephen Hopper and Andrew Brown in 2001 from a specimen collected by Hopper near the Jerdacuttup River north-east of Hopetoun. The description was published in Nuytsia. The specific epithet (decora) is a Latin word meaning "fitting", "proper" or "beautiful".

The Esperance king spider orchid is found near the coast between Bremer Bay and Cape Arid in the Esperance Plains and Mallee biogeographic regions where it usually grows in shrubland and woodlands in winter-wet areas but sometimes also near granite outcrops.

Caladenia decora is classified as "not threatened" by the Western Australian Government Department of Parks and Wildlife.

All content from Kiddle encyclopedia articles (including the article images and facts) can be freely used under Attribution-ShareAlike license, unless stated otherwise. Cite this article:
Caladenia decora Facts for Kids. Kiddle Encyclopedia.