Caladenia flava subsp. flava, commonly known as the cowslip orchid, is a species of orchid endemic to the south-west of Western Australia. It is a relatively common orchid with a single, hairy leaf and up to three golden-yellow flowers which often have red markings.

This subspecies differs from subspecies maculata which has lemon-yellow flowers with fawn-brown or red blotches, 8 to 16 teeth on the labellum and mostly occurs north of Geraldton. It differs from subspecies sylvestris which has pale yellow sepals and petals which are white towards their tips and have a central line of prominent bright red or pink spots forming a line along the dorsal sepal. It occurs mostly between Albany and Bunbury. 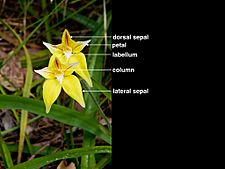 In 2001, Stephen Hopper and Andrew Phillip Brown described three subspecies of Caladenia flava including the autonym Caladenia flava subsp. flava and published the descriptions in Nuytsia. The specific epithet (flava) is a Latin word meaning "golden-yellow".

Cowslip orchid grows in a range of soils, often in winter wet areas, in forest, the coastal woodlands and on the granite outcrops between Geraldton and Israelite Bay in most biogeographic regions of the South-West Province and in the Coolgardie region of the Eremaean Province. The species has been identified as occurring with burnt trees, including marri gum.

Caladenia flava subsp. flava is classified as "not threatened" by the Western Australian Government Department of Parks and Wildlife.

All content from Kiddle encyclopedia articles (including the article images and facts) can be freely used under Attribution-ShareAlike license, unless stated otherwise. Cite this article:
Caladenia flava subsp. flava Facts for Kids. Kiddle Encyclopedia.