Caladenia latifolia, commonly known as pink fairies is a species of orchid endemic to Australia and is common and widespread in the southern half of the continent and in Tasmania. It has a single, hairy leaf and up to four pink (rarely white) flowers. It is easily distinguished by its relatively large, green leaf, and pink flowers on an unusually tall spike. 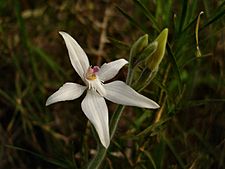 Caladenia latifolia was first described in 1810 by Robert Brown and the description was published in Prodromus Florae Novae Hollandiae. The specific epithet (latifolia) is derived from the Latin latus meaning "broad" and folium meaning "leaf", referring to the broad leaf of this species.

Four varieties have been described:

Pink fairies occurs in Victoria, South Australia, Tasmania and Western Australia. In Victoria it mostly grows in near-coastal areas in sand and is only rarely found inland. In South Australia it is widespread in the south east where it grows in sand in near coastal areas. In Tasmania it grows in coastal scrub and heath in the north of the island. In Western Australia, pink fairies occurs between Kalbarri in the north and Israelite Bay in the south, growing in a wide range of habitats from coastal heath to the margins of inland salt lakes.

All content from Kiddle encyclopedia articles (including the article images and facts) can be freely used under Attribution-ShareAlike license, unless stated otherwise. Cite this article:
Caladenia latifolia Facts for Kids. Kiddle Encyclopedia.