Caladenia longicauda is a species of plant in the orchid family Orchidaceae and is endemic to the south-west of Western Australia. It is distinguished by its large leaf and by its up to five large, white flowers which have drooping sepals and petals with long, thickish brown "tails".

Caladenia longicauda is a terrestrial, perennial, deciduous, herb with an underground tuber and a single hairy leaf, 100–250 mm (4–10 in) long and 5–20 mm (0.2–0.8 in) wide. Between July and early November it produces one to three (sometimes up to five) flowers on a stalk 170–600 mm (7–20 in) tall, each flower 50–180 mm (2–7 in) wide. The flowers are mostly white except for a few red markings and reddish stripes on the backs of the petals and sepals. The dorsal sepal is green, erect, 30–140 mm (1–6 in) long and 1.5–6 mm (0.06–0.2 in) wide with its edges slightly turned inwards. The lateral sepals are 30–150 mm (1–6 in) long, 2–10 mm (0.08–0.4 in) wide, spreading horizontally near their bases but then drooping. The petals are similar to the sepals but slightly shorter and narrower. The labellum is white, 7–28 mm (0.3–1 in) long, 6–18 mm (0.2–0.7 in) wide with erect to spreading teeth up to 10 mm (0.4 in) long along its sides. The middle part of the labellum has the longest teeth on its edge, the teeth red with hooked white tips. The front part of the labellum curves downwards, with the teeth becoming shorter. There are between four and eight rows of calli along the central part of the labellum, the calli pale to dark red and club-shaped. The fruit is a non-fleshy, dehiscent capsule containing a large number of seeds. 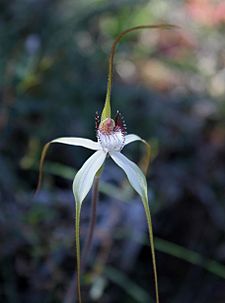 Caladenia longicauda was first formally described by John Lindley in 1840 and the description was published in A Sketch of the Vegetation of the Swan River Colony. The specific epithet (longicauda) is derived from the Latin words longus meaning "long" and cauda meaning "tail".

Caladenia longicauda grows in a wide range of habitats from the Kalbarri National Park on the west coast to Israelite Bay on the south coast.

All content from Kiddle encyclopedia articles (including the article images and facts) can be freely used under Attribution-ShareAlike license, unless stated otherwise. Cite this article:
Caladenia longicauda Facts for Kids. Kiddle Encyclopedia.