Caladenia longicauda subsp. eminens, commonly known as the stark white spider orchid, is a plant in the orchid family Orchidaceae and is endemic to the south-west of Western Australia. It has a single hairy leaf and up to three large, bright white flowers with long, broad, spreading lateral sepals and petals, a relatively broad labellum with short, narrow teeth. It is a relatively common orchid found in a broad band, mainly between Tenterden and Jerramungup. 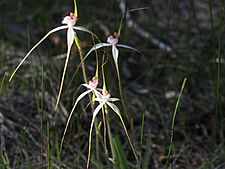 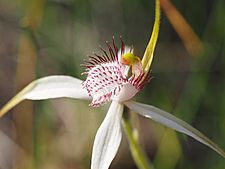 Caladenia longicauda was first formally described by John Lindley in 1840 and the description was published in A Sketch of the Vegetation of the Swan River Colony. In 2001 Stephen Hopper and Andrew Brown described eleven subspecies, including subspecies eminens and the descriptions were published in Nuytsia. The subspecies name (eminens) is a Latin word meaning “prominent", or "illustrious" referring to the attractiveness of the flowers of this subspecies.

The stark white spider orchid mainly occurs between Tenterden and Jerramungup but is also found as far east as Esperance and as far north as Moora, in the Avon Wheatbelt, Coolgardie, Esperance Plains, Jarrah Forest, Mallee and Swan Coastal Plain biogeographic regions where it grows in wandoo (Eucalyptus wandoo) and yate (Eucalyptus cornuta) woodland.

Caladenia longicauda subsp. eminens is classified as "not threatened" by the Western Australian Government Department of Parks and Wildlife.

All content from Kiddle encyclopedia articles (including the article images and facts) can be freely used under Attribution-ShareAlike license, unless stated otherwise. Cite this article:
Caladenia longicauda subsp. eminens Facts for Kids. Kiddle Encyclopedia.