Caladenia longiclavata, commonly known as the clubbed spider orchid is a species of plant in the orchid family, Orchidaceae and is endemic to the south-west of Western Australia. It is a widespread and common orchid with a single, hairy leaf and one or two greenish-yellow, white and red flowers and which grows in the area between Perth and Albany. 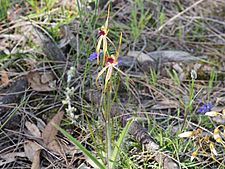 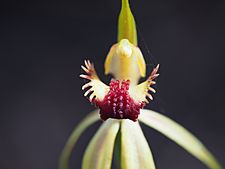 Caladenia longiclavata was first described in 1930 by Edith Coleman and the description was published in The Victorian Naturalist. The specific epithet (longiclavata) is derived from the Latin words longus meaning "long" and clavus meaning "club" or "cudgel" referring to the club-like tips of the sepals and petals.

The clubbed spider orchid is common and widespread between Perth and Albany in the Avon Wheatbelt, Esperance Plains, Jarrah Forest, Swan Coastal Plain and Warren biogeographic regions where it grows in woodland and forests.

Caladenia longiclavata is classified as "not threatened" by the Western Australian Government Department of Parks and Wildlife.

All content from Kiddle encyclopedia articles (including the article images and facts) can be freely used under Attribution-ShareAlike license, unless stated otherwise. Cite this article:
Caladenia longiclavata Facts for Kids. Kiddle Encyclopedia.