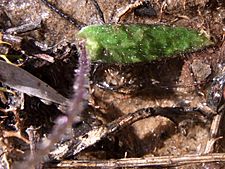 Caladenia minorata, commonly known as the small waxlip orchid, is a plant in the orchid family Orchidaceae and is endemic to eastern Australia. It is a ground orchid with a single very hairy leaf and one or two deep violet-blue flowers. It has been known as Glossodia minor since its description by the prolific Scottish botanist Robert Brown in 1810, but recent discoveries suggest its inclusion in the genus Caladenia. It is similar to Caladenia major (formerly Glossodia major) but is smaller in all its parts.

The small waxlip orchid was first formally described in 1810 by Robert Brown who gave it the name Glossodia minor and published the description in Prodromus Florae Novae Hollandiae. In 2015, as a result of studies of molecular phylogenetics, Mark Clements changed the name to Caladenia minorata. The specific epithet (minorata) is a Latin word meaning to "threaten" or "menace".

Glossodia minor is regarded as a synonym of the name Caladenia minorata which is accepted by the Royal Botanic Gardens, Kew.

All content from Kiddle encyclopedia articles (including the article images and facts) can be freely used under Attribution-ShareAlike license, unless stated otherwise. Cite this article:
Caladenia minorata Facts for Kids. Kiddle Encyclopedia.