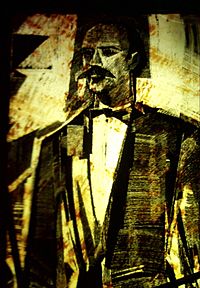 Calixa Lavallée, 1967 art by Frédéric Back at Place-des-Arts metro station in Montreal

Calixa Lavallée, (born Quebec, 28 December 1842; died Boston, 21 January 1891), was a Canadian-American composer. For many years he was a travelling musician. Later he worked hard to improve music education in Canada. He is famous for composing the music for the Canadian national anthem "O Canada".

Lavallée was born into a French-Canadian family. Originally his name was Calixte Paquet. His father made musical instruments and played in a band. He learned to play the piano, violin and cornet. He went to the United States and played in a band during the American Civil War. For many years he travelled, playing and teaching. He becamGrand Opera House which put on minstrel shows rather than proper operas. When the theatre closed in 1872 he went back to Montreal. His friends got enough money together to help him go to France to study at the Paris Conservatoire. There he studied under famous teachers including Boieldieu.

When he went back to Canada he wanted to help to improve the state of music education there. He small music school in Quebec but it was always difficult for him to get money from the authorities. He composed the music to “O Canada” which soon became the Canadian national anthem.

Shortly after that he went to the United States again. He became music director of the Roman Catholic cathedral in Boston and became very active with the Music Teachers’ National Association. He died of tuberculosis in 1891. In 1933, his remains were taken back to Montreal where they were buried in the cemetery.

Besides the tune to O Canada, Lavallée wrote many works, including some comic operas: Loulou, Tiq and The King of Diamonds. Most of the music that was published consists of his lighter pieces, including a short piece for piano called Papillon (Butterfly) which became extremely popular in North America as well as Europe.

All content from Kiddle encyclopedia articles (including the article images and facts) can be freely used under Attribution-ShareAlike license, unless stated otherwise. Cite this article:
Calixa Lavallée Facts for Kids. Kiddle Encyclopedia.