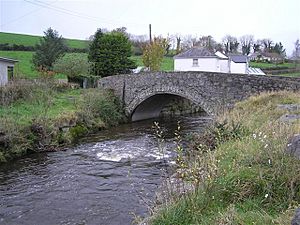 Bridge over the Callan

Callan River is a river in County Armagh, Northern Ireland which joins the River Blackwater 1.6 km upstream from Bond's Bridge. It is navigable by dinghy or canoe for 2 km to Fairlawn Bridge. It flows in a generally northerly direction from Tullnawood lake, past Darkley, passing within a few miles of Keady town, through Tassagh and on to Armagh. The Callan River, flowing by the city of Armagh, and the Tall River, running by Richhill, join together, and the united steam enters the Blackwater one mile below Charlemont

The area upstream of Armagh has many former linen mills that were built to use the waterpower of the river. There is also a viaduct at Tassagh that once carried the railway line from Armagh to Keady.

All content from Kiddle encyclopedia articles (including the article images and facts) can be freely used under Attribution-ShareAlike license, unless stated otherwise. Cite this article:
Callan River Facts for Kids. Kiddle Encyclopedia.