Calothamnus longissimus is a plant in the myrtle family, Myrtaceae and is endemic to the south-west of Western Australia. It is a small, spreading shrub with unusually long, fine leaves and which produces clusters of red flowers in spring. (In 2014 Craven, Edwards and Cowley proposed that the species be renamed Melaleuca longissima.)

Calothamnus longissimus is an erect, stiff, dense or spreading shrub growing to a height of about 1.5 metres (4.9 ft) with many branches and corky bark. Its leaves are fine but rigid, mostly circular in cross section, 150–300 millimetres (6–10 in) long and curved.

The flowers are dark red and arranged in small spikes with the lower part of the flower embedded in the corky bark. The stamens are arranged in 4 claw-like bundles of unequal lengths - the upper two are longer and broader and the lower two lacking anthers. Flowering occurs in August to October and is followed by fruits which are woody capsules almost immersed in the corky bark. 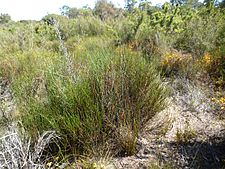 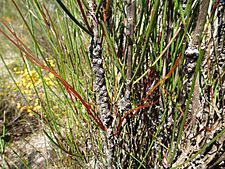 Calothamnus longissimus is found in the Avon Wheatbelt, Geraldton Sandplains and Swan Coastal Plain biogeographic regions where it grows in kwongan.

Calothamnus longissimus is classified as "not threatened" by the Western Australian government department of parks and wildlife.

All content from Kiddle encyclopedia articles (including the article images and facts) can be freely used under Attribution-ShareAlike license, unless stated otherwise. Cite this article:
Calothamnus longissimus Facts for Kids. Kiddle Encyclopedia.