The village of Calumet, then known as "Red Jacket," was originally settled in 1864, and was incorporated in 1867. Calumet was an offshoot of the Calumet and Hecla Mining Company, which mined a rich vein of copper running just south of Calumet. From 1868 through 1886, it was the leading copper producer in the United States, and from 1869 through 1876, the leading copper producer in the world. 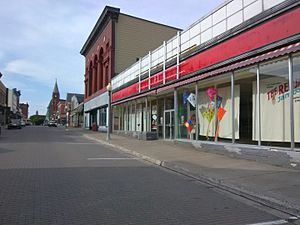 The historic Woolworth's Building located at 215 5th Street, (now the Keweenaw Storytelling Center) is one of the contributing structures within the Historic District. The structure was built in 1948. ( photo taken in 2019)

As the fortunes of the Calumet and Hecla Mining Company went, so went the fortunes of Calumet. The majority of the structures in the downtown Calumet district were constructed in the years between 1880 and 1910, when the copper mining industry was at its peak. The structures reflect the progress of Calumet's fortunes as first frame, and then more substantial sandstone and brick business blocks, were built.

The Calumet Downtown Historic District consists of sixty-two structures. These buildings along Fifth and Sixth Streets comprise the main commercial section of Calumet. These structures include buildings with a frame or shingle exterior, ones covered with metal sheeting, sandstone buildings, brick buildings, and those constructed of a combination of sandstone and brick. These structures define the streetscape of the downtown, with some presenting imposing facades. Many buildings are embellished with common stock elements purchased by the builders; some of these elements are used in combinations, including terra cotta trim, metal cornices, turrets, and cast iron thresholds and columns.

The copper strike in 1913 created an economic depression in the area whose effects lingered for decades. Many commercial buildings have had their facades altered, but for the most part these treatments have been applied over original material and are reversible.

Two substantial buildings, St. Anne's Roman Catholic Church and the Calumet Opera House, anchor the district at the south and the north ends, respectively. In addition, the Calumet Fire Station, now the Upper Peninsula Fire Fighters Memorial Museum, is also located in the district. One of the youngest structures within the Historic District is the 1948 Woolworth's building. The F.W. Woolworth company remained in operation at this site the 1980s. The structure, which looks out of place amongst its older counterparts, shares a very important part of our American retail history.

All content from Kiddle encyclopedia articles (including the article images and facts) can be freely used under Attribution-ShareAlike license, unless stated otherwise. Cite this article:
Calumet Downtown Historic District Facts for Kids. Kiddle Encyclopedia.