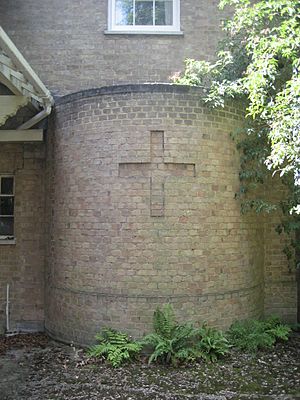 Cambridge Blackfriars is a priory in Cambridgeshire, England. It was established in 1238, dissolved in 1538 and re-established in 1938. It continues to operate as a Dominican priory and, in 2000, became the novitiate house of the English Province of the Order of Preachers.

The new site is at Buckingham Road, Cambridge close to St Edmund's College. Two existing houses were linked by a new wing in 1961-2 designed by David Roberts. The original house was offered to the Order in 1938 by the widow of Professor Edward Bullough. The second house, Howfield, the family home of Arthur Stanley Ramsey, was bought in 1955.

The medieval Dominican Friary was founded before 1238. At the time of its dissolution in 1538, there was a prior and fifteen others. The last prior Gregory Dodds was later Dean of Exeter. Emmanuel College was founded on the site in 1584 and the college's Front Court incorporates 14th-century work from the Friary, in the North Range and Hall.

All content from Kiddle encyclopedia articles (including the article images and facts) can be freely used under Attribution-ShareAlike license, unless stated otherwise. Cite this article:
Cambridge Blackfriars Facts for Kids. Kiddle Encyclopedia.