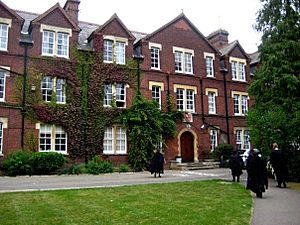 The entrance to St Edmund's College

St Edmund's College is one of the colleges of the University of Cambridge, England. It only has students who are at least 21 years old. They can be both undergraduates or postgraduates. It was created in 1896 and is named after St Edmund of Abingdon who was an Archbishop of Canterbury.

The college is found northwest of the city of Cambridge. It has about 450 students. At the beginning, it mainly had Roman Catholic students because it was built a short time after they were allowed back again in the University. Now it has a very international feeling. It was only in 1998 that St Edmund's was given full college status. Before, it was only considered a "House of Residence" by the University.

Some important people have studied here, like Georges Lemaître, an astronomer. Sir Martin Evans and Amartya Sen, who both won Nobel Prizes, were Fellows (teachers) here. Prince Philip, Duke of Edinburgh is a Honorary Fellow.

All content from Kiddle encyclopedia articles (including the article images and facts) can be freely used under Attribution-ShareAlike license, unless stated otherwise. Cite this article:
St Edmund's College, Cambridge Facts for Kids. Kiddle Encyclopedia.