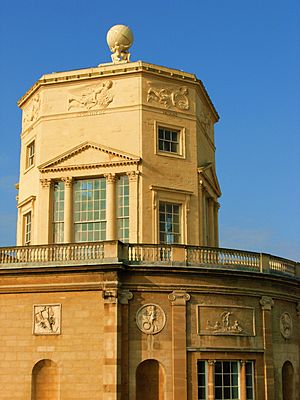 The former Green College was formed in 1979, and was named after one of its largest donors, Cecil H. Green, the founder of Texas Instruments.

Green Templeton College is a graduate college only. It does not have any undergraduate students.

The college is located at the former Green College campus in North Oxford. Its most notable building is the Radcliffe Observatory at the center of the campus.

All content from Kiddle encyclopedia articles (including the article images and facts) can be freely used under Attribution-ShareAlike license, unless stated otherwise. Cite this article:
Green Templeton College, Oxford Facts for Kids. Kiddle Encyclopedia.