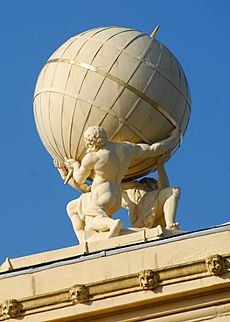 Statue of Atlas on top of the observatory

The observatory was founded and named after John Radcliffe by the Radcliffe Trustees. It was built on the suggestion of the astronomer Thomas Hornsby, who was occupying the Savilian Chair of Astronomy, following his observation of the notable transit of Venus across the sun's disc in 1769 from a room in the nearby Radcliffe Infirmary.

The observatory building commenced to designs by Henry Keene in 1772, and was completed in 1794 to the designs of James Wyatt, with a prominent octagonal tower based on the Tower of the Winds in Athens. Its tower is topped with a statue by John Bacon of Atlas holding up the World.

Until 1839, the Savilian Chair of Astronomy was responsible for the observatory. At this date the appointment of George Henry Sacheverell Johnson an astronomer with no observational experience caused the creation of the new role of Radcliffe Observer.

Because of the viewing conditions, weather, urban development and light pollution at Oxford, the observatory moved to South Africa in 1939. Eventually that site, in Pretoria, also became untenable and the facility was combined with others into the South African Astronomical Observatory (SAAO) in the 1970s.

The building is now used by Green Templeton College off the Woodstock Road and is a centrepiece of the college. The original instruments are now in the Museum of the History of Science, Oxford, except for the Radcliffe 18/24-inch Twin Refractor telescope, which was transferred to the University of London Observatory. 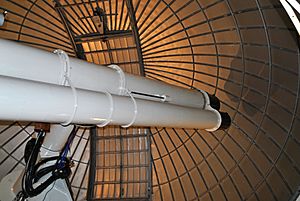 The following have been Radcliffe Observers:

Panoramic view of the observatory in the snow

All content from Kiddle encyclopedia articles (including the article images and facts) can be freely used under Attribution-ShareAlike license, unless stated otherwise. Cite this article:
Radcliffe Observatory Facts for Kids. Kiddle Encyclopedia.