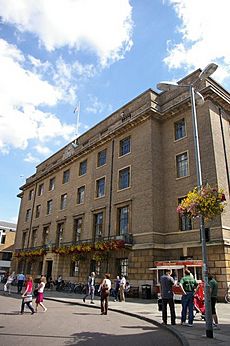 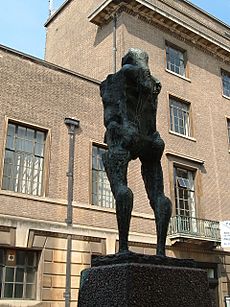 View of the Cambridge Guildhall in Guildhall Street, with Talos, a sculpture in by Michael Ayrton, in the foreground.

Cambridge Guildhall is a listed building designed in 1939 by Charles Cowles-Voysey in the centre of the historic city of Cambridge, England. It includes two halls, The Large Hall and The Small Hall, and is used for many disparate events such as comedy acts, conferences, craft fairs, live music, talks, and weddings. It is also used by University of Cambridge for certain examinations. It is owned and managed by Cambridge City Council, and it is their seat of government.

The Guildhall is located on the south side of Market Hill, the market square in Cambridge, between Peas Hill to the west and Guildhall Street to the east.

The earliest known property on the site was a house owned by a wealthy Jew called Benjamin. The building was granted to the town by King Henry III in the 1220s. Part of it was used as a prison. An adjoining synagogue was leased to the Franciscans who later moved to a convent on a site where Sidney Sussex College now stands. The premises became the Cambridge Town Hall or "Tolbooth" as it was known then since its main function concerned tolls for entry to the town and trading at the market.

The building was raised on arches with market stalls below. The current Market Square was mainly filled with buildings at the time and not cleared until 1849 when a major fire occurred. In 1747, a Shire Hall was built on the open area at the front, on arches with stalls beneath. The Shire Hall and the Tollbooth were connected by a wooden bridge over Butter Row, a market street with stalls selling dairy products.

In 2009 the Guildhall was refurbished and offers better facilities for disabled access and box office sales.

All content from Kiddle encyclopedia articles (including the article images and facts) can be freely used under Attribution-ShareAlike license, unless stated otherwise. Cite this article:
Cambridge Guildhall Facts for Kids. Kiddle Encyclopedia.