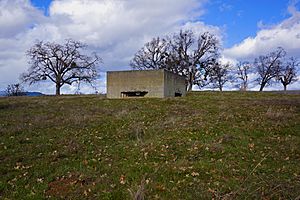 Camp White was an Army training base located in Jackson County, Oregon, United States, during World War II. It was also the site of a prisoner-of-war (POW) camp. The camp was named in honor of George A. White, who served as adjutant general for Oregon starting in 1915.

On December 12, 1941, five days after the attack on Pearl Harbor, Congress appropriated $27 million to transform the Agate Desert into Camp White. A portion of Upper Table Rock was also used for training. The camp was dedicated September 15, 1942. Many of the troops trained at Camp White participated in the Oregon Maneuver combat exercise in the fall of 1943. At its peak, the camp occupied nearly 50,000 acres and contained nearly 40,000 people, making it the second-largest city in Oregon at the time. The camp was deactivated in April 1946. There was a Camp White post office from 1942–60, when the name was changed to White City, the name of the civilian community that took Camp White's place.

All content from Kiddle encyclopedia articles (including the article images and facts) can be freely used under Attribution-ShareAlike license, unless stated otherwise. Cite this article:
Camp White Facts for Kids. Kiddle Encyclopedia.