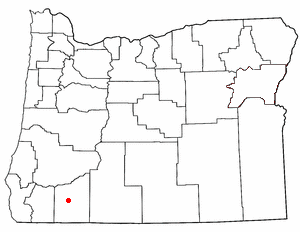 The location of White City in Oregon (red dot).

White City is an unincorporated community in Jackson County, Oregon, United States. For statistical purposes, the United States Census Bureau has defined White City as a census-designated place (CDP). The census definition of the area may not precisely correspond to local understanding of the area with the same name. The population was 5,466 at the 2000 census, and the ESRI estimates 2005 population in the 97503 zip code at 9,946. White City is about 9 mi (14 km) north of the center of Medford and 4 mi (6.4 km) south of Eagle Point.

According to the United States Census Bureau, the White City CDP has a total area of 1.9 square miles (4.9 km2), all of it land.

This region experiences warm (but not hot) and dry summers, with no average monthly temperatures above 71.6 °F (22.0 °C). According to the Köppen Climate Classification system, White City has a warm-summer Mediterranean climate, abbreviated "Csb" on climate maps.

There were 1,761 households out of which 47.4% had children under the age of 18 living with them, 55.8% were married couples living together, 16.4% had a female householder with no husband present, and 21.4% were non-families. 16.9% of all households were made up of individuals and 5.2% had someone living alone who was 65 years of age or older. The average household size was 3.09 and the average family size was 3.43.

The Oregon Department of Fish and Wildlife's Denman Wildlife Area has segments north and south of White City. The TouVelle State Recreation Site is located along Table Rock Road where it crosses the Rogue River. Furthermore, The Nature Conservancy's Agate Desert Preserve is on the west side of White City.

All content from Kiddle encyclopedia articles (including the article images and facts) can be freely used under Attribution-ShareAlike license, unless stated otherwise. Cite this article:
White City, Oregon Facts for Kids. Kiddle Encyclopedia.