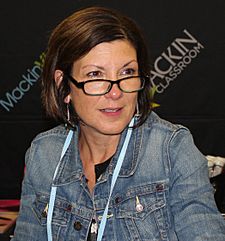 Candace Groth Fleming (born May 24, 1962) is an American writer of children's books, both fiction and non-fiction.

Candace Groth was born in Michigan City, Indiana. She married Scott Fleming. From 1997 to 2005, she was a teacher at William Rainey Harper College near Chicago. Since that time, she has worked full-time as a writer, educator, and speaker.

Her first picture book Professor Fergus Fahrenheit and his Wonderful Weather Machine was published by Simon & Schuster in 1994 as written by "Candace Groth-Fleming" and illustrated by Don Weller (). Subsequent publications have all appeared under the name Candace Fleming.

Fleming is the author of more than twenty books for children and young adults, including the Los Angeles Times Book Prize honored The Family Romanov: Murder, Rebellion, and the Fall of the Russian Empire; Boston Globe/Horn Book Award-winning biography, The Lincolns; the bestselling picture book, Muncha! Muncha! Muncha!; and the beloved Boxes for Katje. The bibliography below lists each of her published works.

All content from Kiddle encyclopedia articles (including the article images and facts) can be freely used under Attribution-ShareAlike license, unless stated otherwise. Cite this article:
Candace Fleming Facts for Kids. Kiddle Encyclopedia.