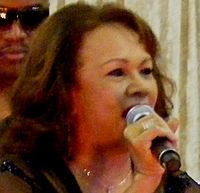 Canzetta Maria "Candi" Staton (born March 13, 1940) is an American soul and gospel singer. She was born in Hanceville, Alabama.

Staton is best known in the United States for her 1970 remake of Tammy Wynette's "Stand By Your Man" and her 1976 disco chart-topper "Young Hearts Run Free".

In Europe, her biggest selling record is the anthemic "You Got the Love" from 1986, released in collaboration with the Source. Staton was inducted into the Christian Music Hall of Fame. Staton is a four-time Grammy Award nominee.

On October 30, 2018, Staton announced that she had been diagnosed with breast cancer.

All content from Kiddle encyclopedia articles (including the article images and facts) can be freely used under Attribution-ShareAlike license, unless stated otherwise. Cite this article:
Candi Staton Facts for Kids. Kiddle Encyclopedia.