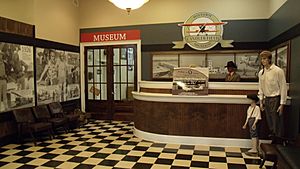 The Candler Field Museum was a non-profit venture to recreate the Hartsfield-Jackson Atlanta International Airport as it appeared in the 1920s and 1930s. It was located in Williamson, Georgia, at Peach State Airport. Founded in March, 2005 as Candler Field Museum, Inc., it featured one complete building, several aircraft and vehicles, and a large collection of era and general aeronautical memorabilia. The museum closed in February 2021.

In 2005, retired pilot Ronald Alexander bought Peach State Airport. In March 2004, he founded Candler Field Museum, Inc., a 501(c)(3) organization with the purpose to recreate the old Atlanta airport. In September 2008, the first building (American Airways hangar) was completed; as of October 2014, it was open to the public. The museum closed in February 2021. 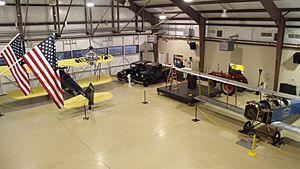 The museum's Waco biplane was also used to provide biplane rides for a fee. For the use of museum members was a library, well stocked with aviation-themed books, magazines, and photographs.

Candler Field Museum was affiliated with or supported the following:

All content from Kiddle encyclopedia articles (including the article images and facts) can be freely used under Attribution-ShareAlike license, unless stated otherwise. Cite this article:
Candler Field Museum Facts for Kids. Kiddle Encyclopedia.