It was declared a National Historic Landmark in 1991. 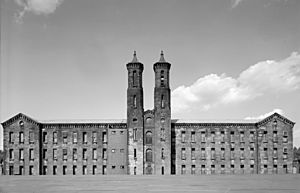 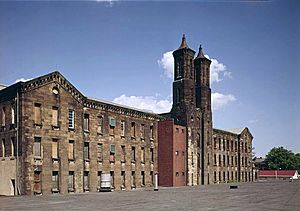 Mill in 1981, before adaptive restoration

Construction of the Cannelton Cotton Mill began in 1849 and was completed in 1851. Designed by Rhode Island architect Thomas Alexander Tefft and built of sandstone, the mill was once the largest industrial building in the United States west of the Allegheny Mountains. It initially employed about 400 workers, mostly women and girls, and annually produced more than 200,000 pounds of cotton batting and four million yards of cotton sheeting. Of 309 workers employed there in 1890, only 78 were men. As late as 1900, the mill employed 35 girls and 19 boys under the age of 18. 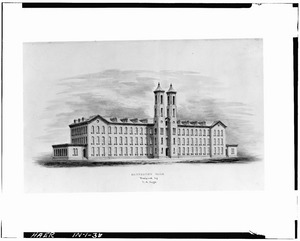 The driving force behind the mill's construction was Hamilton Smith (1804–1875), a prominent attorney from Louisville, Kentucky. Smith's vision was to create a western milling center to rival Lowell, Massachusetts, but using steam-powered machinery fired by locally produced coal instead of the hydropower that ran the Lowell mills. The task proved too difficult for Smith and his associates, one of whom was Salmon P. Chase, later United States Secretary of the Treasury and Chief Justice of the United States, who became Smith's friend when both were students at Dartmouth College. Another was Indiana federal judge Elisha Mills Huntington. In 1851, control of the mill passed to brothers Dwight Newcomb (1820–1892) and Horatio Dalton Newcomb (1809–1874) who operated it successfully.

The mill closed in 1954. It was listed on the National Register of Historic Places in 1975 and became a National Historic Landmark in 1991. The adaptive restoration of the mill to a 70-unit, low-income apartment complex was completed in 2003.

Located facing the Ohio River, the mill is 280 feet (85 m) long and 60 feet (18 m) wide. Its most striking features are 100-foot (30 m) twin towers, one housed a fire escape and the other was used for water storage and fire protection. The mill's style is Romanesque, but it was not built as Tefft originally designed it. Tefft's drawings called for each story to have different window heads and for dormer windows in the roof. His plan also called for a stepped foundation. As built, the dormers were eliminated completely and the remaining windows, except for those in the towers, were all capped with square lintels. A half-basement with square windows replaced the stepped foundation. The overall effect is much more severe than Tefft had intended.

All content from Kiddle encyclopedia articles (including the article images and facts) can be freely used under Attribution-ShareAlike license, unless stated otherwise. Cite this article:
Cannelton Cotton Mill Facts for Kids. Kiddle Encyclopedia.