Kids Encyclopedia Facts
This page is about the house in Macon, GA. For other houses, see Cannonball House. 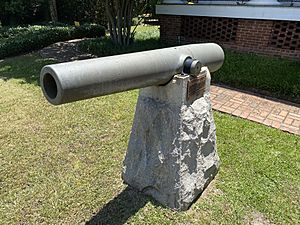 Cannon located in front of the Cannonball House 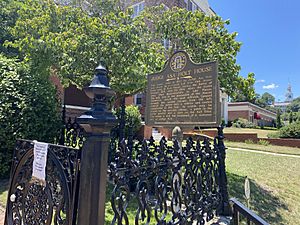 The Cannonball House is located at 856 Mulberry Street in Macon, Georgia, United States and is a historically significant house with a story behind its name. On July 30, 1864, the house coined its name due to damage caused by a cannonball striking the house from a Union Army attack in the American Civil War. The Cannonball House was constructed originally as a planter's townhouse in 1853. It was built by and for Judge Asa Holt. This explains why this house is also known as the "Mansion of the Old South" and the "Home of Judge Asa Holt." The house was built using an authentic Greek revival architectural style and is listed in the National Register of Historic Places.

The recreated meeting rooms of the Adelphean (ΑΔΠ) and Philomathean (ΦΜ) societies (the world's first college sororities established at Wesleyan College in 1851 and 1852, respectively) are on display inside the house. The entire house is furnished to the 1853-1870 period.

The rear of the Cannonball House is occupied by a hand-molded two-story brick kitchen. The upper level of this house served as servants' quarters. Few structures of this type remain in the Southern United States today. A bronze cannon, forged in 1864 at the Macon Arsenal, is on display in front of the Cannonball House.

The damage was done by the U.S. Army, under General George Stoneman, firing a cannonball from the location of what is now known as the Ocmulgee Mounds National Historical Park, across the Ocmulgee River. The Union's iron cannonball bounced into the front of the house's left middle column after first striking sand sidewalk. These events occurred during the Battle of Dunlap Hill on July 30, 1864. No one was killed, or even injured during this assault, but the cannonball finally ended in the interior hallway after passing through a parlor. The Cannonball House is the only home in Macon that received damage.

Due to failure to pay taxes, the city of Macon wanted to tear the home down and turn the site into a parking lot while descendants of the family were living in it in 1962. Thanks to the United Daughters of the Confederacy, the house was purchased from the last family member living in the home, Miss Elizabeth Martin. They would make an apartment for her upstairs, and she was the first tour guide of the house.

The Cannonball House was owned by Judge Asa Holt during the war and remained in the family until 1962 when it was sold to the United Daughters of the Confederacy.

Artifacts from the antebellum era through the reconstruction era play a major role in the Cannonball House's mission to glorify Georgia's heritage. Community members and visitors have the house's devotion of presenting them historical educational programs, exhibits, and events with the intention of engaging and inspiring them. The Cannonball House currently holds a collection of Civil War artifacts and provides visitors with the opportunity to shop in the gift shop, explore the garden, and join historical and educational tours. Currently, the house serves as a historic house museum that culturally and architecturally presents the past of Macon. It is owned and operated by The Friends of the Cannonball House, a non-profit organization.

The Adelphean Society, today known as Alpha Delta Pi, is the first national collegiate women's society. This society's original furnishings are in the parlor today, along with the founders' portraits. The Adelphean Society's diamond symbol is an important part of the display in the room, as well.

Today known as Phi Mu, the Philomathean Collection in the house contains the founders' portraits, jewelry personalized with the Philomathean motto, original light fixtures, marble mantel, and a glass chandelier.

The Civil War museum that is a part of the house displays Georgian officers' uniforms and their used weapons. Uniforms include the jacket of Richmond Depot Type II. Company flags can be found in this collection, such as the Jackson Artillery Flag.

Textiles and period clothing are found and rotated in the general collection. Quilts handmade between 1850 through 1920, nineteenth century wedding dresses, original day dresses, and children's clothing all rotate in and out of display due to their fragility.

All content from Kiddle encyclopedia articles (including the article images and facts) can be freely used under Attribution-ShareAlike license, unless stated otherwise. Cite this article:
Cannonball House (Macon, Georgia) Facts for Kids. Kiddle Encyclopedia.