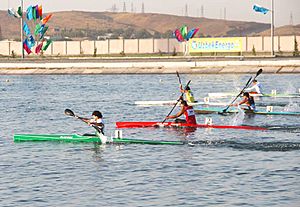 Canoe racing is a water sport. The sport normally takes place on water that is moving very slowly or not moving at all. The goal of the sport is to move the canoe a given distance in the shortest time. This sport is an Olympic event. At one time, wooden boats were used for racing. Over time, people started using boats made of carbon fibers. These boats are lighter and tougher than wooden boats.

There are two main types of races. These are canoe (C1, C2, C4) and kayak (K1, K2, K4). The number tells how many people are on the boat. In a kayak, a person sits. In a canoe, a person kneels on one knee. A kayak has a rudder. It is used to steer the boat. A canoeist (person who uses a canoe) uses the paddle to move the boat. This is done by moving the paddle from the bow to the stern (front to back). After each race, the boats are looked at to make certain they are legal. If a boat does not have enough weight, the racer is disqualified and cannot win the race.

Races are divided into several groups based on how long they are.

In short distance races, the races are either 200 m, 500 m or 1000 m long. The path of the race is laid out using buoys. Each person has a separate path to follow from the starting line to the finish. On longer races, there may be a point where the paths cross each other to let the person turn their boat. 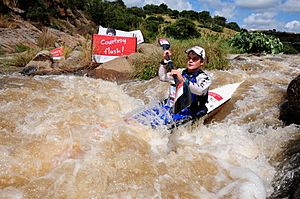 A paddler shooting Mission Rapid during the Dusi Canoe Marathon

An example of a long distance marathon is the The Dusi Canoe Marathon which is held over three days between Pietermaritzburg and Durban, South Africa

All content from Kiddle encyclopedia articles (including the article images and facts) can be freely used under Attribution-ShareAlike license, unless stated otherwise. Cite this article:
Canoe racing Facts for Kids. Kiddle Encyclopedia.