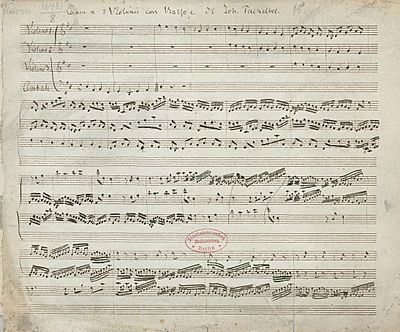 The first 9 bars of the Canon in D. The violins play a three-voice canon over the ground bass to provide the harmonic structure. Colors highlight the individual canonic entries.

Pachelbel's Canon (also known as Canon in D major or just Canon in D) is the most famous piece of music by Johann Pachelbel. It was written in or around 1680, as a piece of chamber music for three violins and basso continuo, but it has been arranged for many other instruments since then. It is well known for its chord progression.

Several months after the Paillard recording was released, two groups released successful singles with a backing track based on Pachelbel's Canon: Greek band Aphrodite's Child with "Rain and Tears" and Spanish group Pop-Tops with "Oh Lord, Why Lord".

In 2002, pop music producer Pete Waterman described Canon in D as "almost the godfather of pop music because we've all used that in our own ways for the past 30 years". He also said that Kylie Minogue's 1988 UK number one hit single "I Should Be So Lucky", which Waterman co-wrote and co-produced, was inspired by Canon in D. The Farm's 1990 single "All Together Now" has its chord sequence lifted directly from Pachelbel's Canon.

The Pet Shop Boys' 1993 cover of "Go West" played up that song's resemblance to both Pachelbel's Canon and the Soviet Anthem. Coolio's 1997 "C U When U Get There" is built around a sample of the piece. Other songs that make use of the Pachelbel's Canon chord progression include "Streets of London" by Ralph McTell (1974), "Basket Case" by Green Day (1994), "Don't Look Back in Anger" by Oasis (1996) (though with a variation at the end) and "Graduation (Friends Forever)" by Vitamin C (2000).

In 2012, the UK–based Co-Operative Funeralcare compiled a list of the most popular, classical, contemporary and religious music across 30,000 funerals. Canon in D placed second on the Classical chart, behind Edward Elgar's "Nimrod".

The Trans-Siberian Orchestra's 1998 song "Christmas Canon" is set to the tune of Pachelbel's Canon. "Sunday Morning" on Procol Harum's 2017 album Novum is based on the canon.

All content from Kiddle encyclopedia articles (including the article images and facts) can be freely used under Attribution-ShareAlike license, unless stated otherwise. Cite this article:
Pachelbel's Canon Facts for Kids. Kiddle Encyclopedia.