Johann Pachelbel (born Nuremberg (German:Nürnberg), baptized 1 September, 1653; died Nürnberg, buried 9 March, 1706) was a German composer and organist. He is very famous for his organ music. He also wrote other keyboard music and music for the Protestant church. His Canon in D has become a very popular piece of music and is very often played today at church weddings and other events. 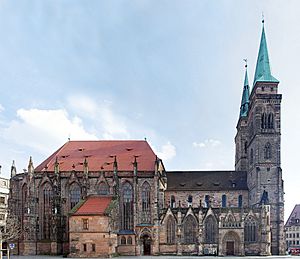 St. Sebaldus Church in Nuremberg, which played an important role in Pachelbel's life

He was brought up in Nürnberg and had his first music lessons there. In 1669 he went to study at the university of Altdorf, but after a year he had to leave because his father could not afford to keep him. About a year later he went to study at the Gymnasium Poeticum in Regensburg. The directors of that school must have realized that he was an extremely talented musician, because they made an extra scholarship for him and allowed him to have special music lessons outside the school.

In 1673 he went to Vienna where he was deputy organist at St Stephen’s Church. He heard a lot more music there, especially the music of the catholic composers of South Germany and Italy. After a short while at Eisenach he got the job of organist at the Predigerkirche in Erfurt.

In 1681 he married, but his wife and their baby boy died in the plague. In 1684 he married again and the couple had five sons and two daughters. Pachelbel taught Johann Christoph Bach who later taught Johann Sebastian Bach.

Pachelbel became a very famous organist. He stayed in Erfurt until 1690. After another five years he became organist at St Sebald, Nürnberg where he stayed for the rest of his life.

Pachelbel is best known for his organ music. He wrote many organ pieces based on chorales while he was in Erfurt. In Nürnberg he wrote many piece called Magnificat fugues. These were preludes which were played before the singers sang the Magnificat. His organ music also includes toccatas, ricercares, fantasias and ciacconas. He wrote many suites for harpsichord and chamber music and vocal music.

All content from Kiddle encyclopedia articles (including the article images and facts) can be freely used under Attribution-ShareAlike license, unless stated otherwise. Cite this article:
Johann Pachelbel Facts for Kids. Kiddle Encyclopedia.