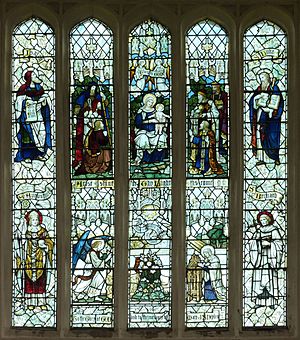 The Priory was founded by Stephen la Leye on a site to the south of the present church between 1147 and 1151 in the reign of Henry II.

In 1253 the Augustinians were granted a licence to dig the Norwell, which still exists north of the present church, to supply water to the priory.

In 1537 after the Dissolution of the Monasteries the Crown granted the priory and its estates to Sir Francis Bryan, a close ally of Henry VIII. Bryan held the estate for only about a year before selling it in 1538 to Sir John Cope, a wealthy Banbury lawyer. Sir John's daughter Elizabeth inherited what is thought to have been the priory farmhouse [wrong – Wilkyns farm was part of John Dryden's inheritance. Copes Ashbie – across the road – was inherited by Elizabeth's brother, who died early leaving his sons as Wards of the Dryden family][contradictory]. In 1551 she married John Dryden, who extended the building to form the earliest parts of Canons Ashby House.

Part of the building survives: the Church of England parish church of St Mary dates from about 1250 and this, together with Canons Ashby House, is now owned by the National Trust. Its power and size can be judged by its outlying buildings which cover a large area of the surrounding countryside. The remains of the priory's hospitalium survive as the monastic building centred on the parish church of Maidford, about 5 miles (8 km) away.

All content from Kiddle encyclopedia articles (including the article images and facts) can be freely used under Attribution-ShareAlike license, unless stated otherwise. Cite this article:
Canons Ashby Priory Facts for Kids. Kiddle Encyclopedia.