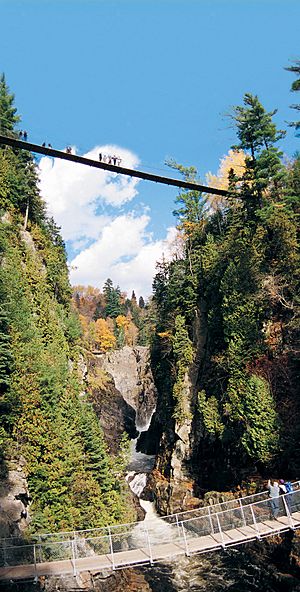 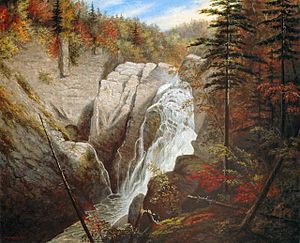 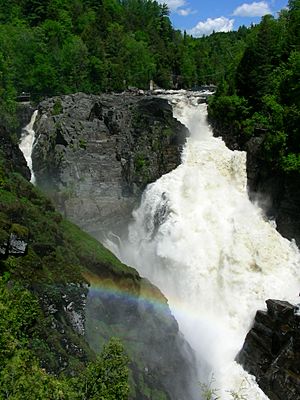 Open from May to October, Canyon Sainte-Anne is a spectacular, steep-sided gorge, carved by the Sainte-Anne-du-Nord River, 6 km east of Beaupré, Quebec, Canada. The river drops over a 74 m (243 ft) waterfall within the canyon.

The Canyon receives over 100,000 visitors per year. Three suspension foot bridges cross the canyon, including one 60 m (197 ft) metres above the river. Many scenic overlooks allow families to discover giant potholes and other cascades. Rock-climbing, via ferrata (the first one installed in Canada), and rappelling the canyon walls are permitted with supervision.

Accessible to the public since 1973, the canyon was familiar to natives, painted by Kreighoff and described by American philosopher and environmentalist Henry David Thoreau. It was used during the filming of Battlefield Earth in 2000.

Canyon Sainte-Anne is located 25 to 30 minutes east of Quebec City, at the edge of the Beaupré Coast and Charlevoix regions. It lies on the border between the municipalities of Saint-Ferréol-les-Neiges and Saint-Joachim. The Sainte-Anne-de-Beaupré Basilica, the ski resort Mont Sainte-Anne, the Montmorency Falls and the Cap Tourmente National Wildlife Reserve are in the same area.

The canyon is part of the Canadian Shield, a fundamental rock formation of northern parts of Manitoba, Ontario and Quebec, all around the Hudson Bay. It all started in the Precambrian Age (1,2 billion years ago) when hard rock formed the canyon's underlying rock. This metamorphic rock, called granitic gneiss, was formed at high pressure in the extremely hot depths of earth then rose to the surface through erosional uplift. It comprises much of Mont Ste-Anne. Later, some 450 million years ago, a sedimentary Palaeozoic sediment, a marine mud, was deposited in ancient seas on top of the gneiss, and consolidated into a rock called shale. The shale was metamorphosed into slate during the Acadian orogeny (a mountain building period 375 million years ago). Slate is a hard, resistant rock, able to withstand the erosive power of water.

Much later, two successive ice ages covered North America. The advance and recession of the last ice age helped sculpt the region into what we see now (the St. Lawrence Lowlands area with the St. Lawrence River, Île d'Orléans, and the Magdalene Islands, as well as all the rivers known today). The weight of the ice depressed the crust so that, when the ice retreated (melted), the Atlantic Ocean waters invaded to form the Champlain Sea (and deposit the most recent sediments of sand, gravel, and clay). The subsequent rebound of the crust and erosion produced the landscape we see today.

Because of its advantageous route, the Sainte-Anne-du-Nord River was widely used by loggers at the start of the 20th century. During a camping trip to the area in the summer of 1965, a former logger explained to Jean-Marie McNicoll how to reach the Sainte-Anne River falls. As there was no road to the river, Jean-Marie had to make his way through the woods but was rewarded with the discovery. He returned to his brother Laurent telling him he had discovered a unique place.

Two years later, they leased the immediate shores of the river from Hydro-Québec and purchased the wooded lots between Route 138 and the leased riverbanks. Slowly but surely, work began to clear a road. All was in place to welcome the first visitors on July 14, 1973.

In the same area

All content from Kiddle encyclopedia articles (including the article images and facts) can be freely used under Attribution-ShareAlike license, unless stated otherwise. Cite this article:
Canyon Sainte-Anne Facts for Kids. Kiddle Encyclopedia.