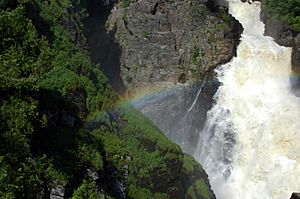 Rivière Sainte-Anne is a river in the Capitale-Nationale region. It has a length of 72,2 km, covers a basin of 1,077 km2 (416 sq mi) and has an average flow of 26 m3/s. The river finds its source at Lac de la Tour in Grands-Jardins National Park. From there, it flows south and ends at Beaupré, opposite Île d'Orléans, 35 km northeast of Quebec City in the St. Lawrence River.

In Saint-Ferréol-les-Neiges are the Seven Chutes, falls which in many cases are 128 m high. Then the river crosses the Canyon Sainte-Anne, a gorge with a length of 10 km. At its end, in Saint-Joachim is the Sainte-Anne waterfall, 74 m high.

Intermediate course of the Sainte-Anne river (downstream of the Brûlée River) (segment of 16.5 kilometres (10.3 mi))

The Sainte-Anne river ends at Beaupré, opposite the northern tip of Île d'Orléans, on the northwest shore of the Saint Lawrence river. This mouth is located at:

The toponym "Rivière Sainte-Anne" was formalized on April 4, 1982 at the Place Names Bank of the Commission de toponymie du Québec

The Sept-Chutes power plant, a hydroelectric power plant run-of-the-water power plant belonging to Hydro-Québec is on the Sainte-Anne river. It was built in 1916 and modernized in 1999. It has 4 turbines for a total output of 22 MW. The hydraulic potential amounts to 124.97 m. The power station can be visited.

The Hydro-Canyon Saint-Joachim run-of-river power plant project was designed taking into account the technical and environmental aspects of the integration environment.

The development will harmonize with the recreotourism facilities of Canyon Sainte-Anne.

The works will optimize the site on the hydroelectric level while developing the potential of the Sainte-Anne waterfall. The maximum power of the plant will be 23.2 MW.

The installation will include: 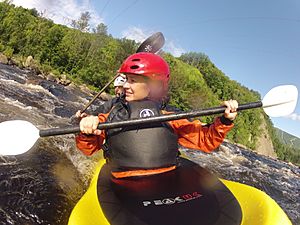 The Sainte-Anne-du-Nord river has also been used since 1966 by a club and a river kayak school. First bearing the name of Club Echohamok, it has evolved to bear today the name of Côte-de-Beaupré. It must be said that the Sainte-Anne-du-Nord river has a portion of river located between the Sept-Chutes hydroelectric plant and the Hydro-Canyon hydroelectric plant which is classified 5 stars by the guide of rivers of Quebec.

All content from Kiddle encyclopedia articles (including the article images and facts) can be freely used under Attribution-ShareAlike license, unless stated otherwise. Cite this article:
Sainte-Anne River (Beaupré) Facts for Kids. Kiddle Encyclopedia.