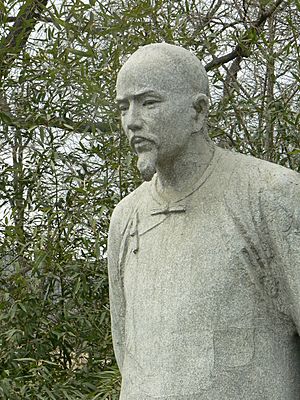 Cao Xueqin (Chinese: 曹雪芹, 1724 or 1715 — 1763 or 1764), was a Chinese writer during the Qing Dynasty. The most famous work by Cao Xueqin is the Dream of the Red Chamber, which is thought to be a great novel in Chinese literature. There are very little details known about his life. He came from a rich family that had lost its money in 1728 after the death of the Kangxi Emperor. He lived in the country west of Peking where he worked as a teacher and sold his paintings. He spent ten years writing the book, but a large part of the end of the book was written by a different writer after he died.

All content from Kiddle encyclopedia articles (including the article images and facts) can be freely used under Attribution-ShareAlike license, unless stated otherwise. Cite this article:
Cao Xueqin Facts for Kids. Kiddle Encyclopedia.