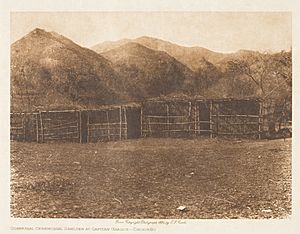 The reservation was created by US Executive Order in 1875 for local Kumeyaay people. Its name comes from the Spanish Coapan, which was what the area west of the San Diego River was called in the 19th century. The dry, mountainous and chaparral lands proved inhospitable.

In 1931, the state flooded the heart of the reservation, creating the El Capitan Reservoir. Many Kumeyaay families had homes in the floodzone, and they petitioned Congress to prevent the loss of their land; however, Congress gave San Diego the right to buy the land without the local Kumeyaays' knowledge or consent. The two tribes, Barona and Viejas, were forced to sell the land and with their proceeds they purchased their current reservations, the Barona Reservation and Viejas Reservation, respectively.

Today, the two tribes have a joint-trust patent of the remaining reservation. It is undeveloped but serves as an ecological preserve.

All content from Kiddle encyclopedia articles (including the article images and facts) can be freely used under Attribution-ShareAlike license, unless stated otherwise. Cite this article:
Capitan Grande Reservation Facts for Kids. Kiddle Encyclopedia.