In 1875, the Viejas Band shared the Capitan Grande Reservation along with the Barona Group of Capitan Grande Band of Mission Indians, which consisted of lands in and around the present day El Capitan Reservoir. The El Capitan Reservoir, forcibly purchased from the two tribes to provide water for San Diego, submerged what habitable land existed on the reservation. The two tribes jointly control this reservation. It is undeveloped but serves as an ecological preserve.

The reservation is home to scrub oaks and chaparral. The name "Viejas" comes from the Spanish name for their land, "El Valle de Las Viejas" or "The Valley of the Old Women." In 1973, 121 of the 127 enrolled members lived on the reservation. 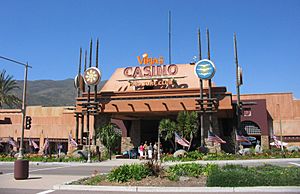 The tribe owns 50 percent of the Broadcast Company of the Americas, which operates a sports talk station, The Mighty 1090-AM in San Diego.

Two major annual ceremonies on the reservation are the "Clearing of the Cemetery", when tribal members clean and pay their respects at the two tribal cemeteries, and Dia de las Animas or All Soul's Day.

All content from Kiddle encyclopedia articles (including the article images and facts) can be freely used under Attribution-ShareAlike license, unless stated otherwise. Cite this article:
Viejas Group of Capitan Grande Band of Mission Indians Facts for Kids. Kiddle Encyclopedia.