Captain Pugwash is a fictional pirate in a series of British children's comic strips and books created by John Ryan. The character's adventures were adapted into a TV series, using cardboard cut-outs filmed in live-action (the first series was performed and broadcast live), also called Captain Pugwash, first shown on the BBC in 1957, a later colour series, first shown in 1974–75, and a traditional animation series, The Adventures of Captain Pugwash, first aired in 1998.

The eponymous hero – Captain Horatio Pugwash – sails the high seas in his ship called the Black Pig, assisted by cabin boy Tom, pirates Willy and Barnabas, and Master Mate. His mortal enemy is Cut-Throat Jake, captain of the Flying Dustman.

The first Captain Pugwash episodes were transmitted in black and white between 1957 and 1966. The series was revived in colour and broadcast between 16 September 1974 and 11 July 1975. Captain Pugwash was also sold to various overseas TV stations, including Australia's ABC Television. There the show was screened during weekday afternoons in the 1970s and 1980s.

The rights to Captain Pugwash were purchased by The Britt Allcroft Company, which since 1997 has issued a number of digital and part computer-animated cartoon films based on the Pugwash character, set on the island of "Montebuffo", "somewhere in the Spanish Main". Peter Hawkins did not provide the voices, HIT Entertainment instead employing a full cast with James Saxon in the title role.

In 2005, a black and white episode of Captain Pugwash was repeated on BBC4 as part of the Animation Nation season.

A DVD containing "All 30 heroic high sea adventures" from the second-generation colour 1974–75 series (156 minutes running time) was given away with the Sunday Times on 20 January 2008. 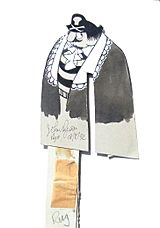 The pompous but likeable captain of the Black Pig. Although he boasts of being the "bravest buccaneer", he is actually quite cowardly and stupid. His greed often gets him into trouble. Nevertheless, he usually wins the day – either with the help of Tom the Cabin Boy or by sheer luck. Despite being a pirate, he is rarely seen committing any acts of piracy.

A somewhat dopey character, who has a tendency to use malapropisms and to mispronounce common words. He has a teddy bear in his bunk and is quite mild-mannered. It is not entirely clear why he is the mate, as he does not appear to have any authority over the rest of the crew. He was present in the first ever Pugwash story, in which he was depicted as being constantly sleepy.

The most aggressive of the pirates, but in reality just as harmless. He is quite rebellious and grumpy, and is perhaps marginally more intelligent than Willy, the Mate or the Captain. He was not present in the 1997 series.

A simple sailor from Wigan. He appears to be the youngest crew member (apart from Tom). He is a gentle soul, and is against using violence. He does, however, have the occasional brainwave and has been the crew's saviour (admittedly sometimes more by luck than by design). "Just you wait till we get back to Wigan – we won't half have a 'tail' to tell!"

It might be argued that without Tom, Pugwash would have been sunk long ago. He is the most intelligent and resourceful member of the crew, the only one who can cook and the only one who can actually sail a ship. Although Pugwash would never admit it, Tom's ability to think up schemes is probably the only thing that prevents him from being a total failure as a pirate. The rest of the crew also found they were unable to operate without Tom, after he left with the captain when the crew mutinied. Tom is an expert concertina player, despite this being a 19th-century anachronism for an 18th-century pirate, and part of his repertoire is "The Trumpet Hornpipe" (the Captain Pugwash theme).

Captain Pugwash's fearsome arch-enemy, captain of the Flying Dustman (a pun on the Flying Dutchman combined with a reference to the occupation of dustman). When he is not scheming to bring about Pugwash's downfall, he is a rather more competent pirate than his enemy, and always seems to have plenty of treasure. He speaks with a stereotypical West Country accent, and is easily recognisable by his eye patch and enormous black beard.

Characters added in the later series

This character replaced pirate Barnabas, who featured in the earlier series. His catchphrase is "No good will come of this, mark my words!" Jonah appears to be of a Jamaican origin. He is the tallest of the crew as he often hits his head on the ceiling of the ship's lower deck. He is also one of the strongest of the crew as he serves as the Black Pig's carpenter.

This character lives at the top of the island in a mansion covered in vines. He talks very quietly and his head of guard, Lt. Scratchwood, usually acts as a megaphone. He is deeply in love with Donna Bonanza and attends to her every need.

This pirate queen appeared in the second series when she hijacked the captain's ship to escape from the authorities.

An Australian pirate who works for Jake. He almost always has a mug of grog in his hand. This character appeared in the original series, but never spoke, nor was he named.

A Mexican who works for Jake who speaks little English. He repeats everything that Jake says, annoying him greatly. Again, this character was an unnamed, unspeaking character in the earlier series.

The voice for the governor and the law for the town of Portobello. In charge of the guard and collecting taxes, he also spends his time chasing thieves.

Captain Pugwash is renowned for his exclamations, owing something to the style of Captain Haddock in The Adventures of Tintin:

Cut-Throat Jake has occasionally been known to utter the similar exclamation, "Scupper me skull-and-crossbones!"

The series' signature tune was the "Trumpet Hornpipe", a folk dance that dates to at least the early nineteenth century. Some early versions of the tune refer to it as "Lascelles Hornpipe" and "Baloon Hornpipe". The composer and country of origin are unknown.

The original black and white episodes of Captain Pugwash used a solo rendition by accordionist Tom Edmondson, who had learned the tune from watching Jimmy Shand's band in Northumberland as a teenager. Edmondson's version was recorded in the front room of his home in Harbottle, Northumberland, on 12 July 1954. The recording was made by folklorist Peter Kennedy as part of the BBC's 'Folk Music and Dialect Recording Scheme' and Edmondson was paid £1.50 (30s) for his efforts. The track was transferred to disc for the BBC Sound Library and, according to John Ryan, it was later chosen as the Captain Pugwash theme by "a genius at the BBC", whose name he could not remember.

The full recording was issued by Peter Kennedy on his Folktrax label as part of a collection entitled "Scottish Accordion Music". The original tape was donated to the British Library following Kennedy's death in 2006. As of June 2020, the tape has not been digitised.

For the colour Captain Pugwash episodes, a new recording of the "Trumpet Hornpipe" was commissioned from Johnny Pearson in 1973. This version utilised accordion, bass and acoustic guitar, and the finished piece was retitled "Shipshape". The recording was published by KPM and was later added to the KPM Recorded Music Library who gave Pearson the composer credit.

Many online sources state that Philip Lane arranged the original version of the Captain Pugwash theme. As Lane would have been four years old in 1954, this would seem unlikely; in fact, Lane is credited on-screen with orchestrating the score for the 1998 series. Johnny Pearson was not credited on these episodes.

The books were 32 pages each, alternating two pages full colour and two pages black, blue and white, by Puffin Books.

Series One [The Thrilling Adventures of Captain Pugwash and Stowaway Tom]

These episodes were transmitted live and voiced by Noel Coleman. Only episode 2 exists in the BBC Archives as a 16mm film telerecording.

The first four episodes were voiced by Howard Marion-Crawford, with Peter Hawkins taking over from part five. These episodes all survive as 16mm film telerecordings apart from part six.

From 3 October 1962, series 4–6 of Captain Pugwash were repeated (skipping only The Powder Magazine and Ivory Cargo.) The twenty episodes ran until 29 March 1963.

Series Nine exists complete as 16mm telerecordings apart from The Haunted Reef and The Escape.

In May 2017, a live-action film adaptation was announced, to be directed by John Hay and starring Nick Frost as Captain Pugwash and Jason Flemyng in an unknown role. Production was set to begin in 2018, with the plot following Captain Pugwash travelling to Botany Bay, where he eventually finds himself at the helm of The Black Pig on a mission to rescue Tom the Cabin Boy's father, who is marooned on a volcanic island.

All content from Kiddle encyclopedia articles (including the article images and facts) can be freely used under Attribution-ShareAlike license, unless stated otherwise. Cite this article:
Captain Pugwash Facts for Kids. Kiddle Encyclopedia.