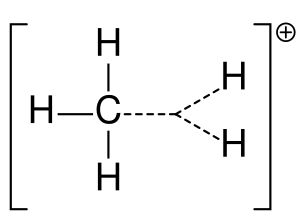 In 1891, G. Merling reported that he added bromine to tropylidene (cycloheptatriene) and then heated the product to obtain a crystalline, water soluble material, C7H7Br. He did not suggest a structure for it; however Doering and Knox convincingly showed that it was tropylium (cycloheptatrienylium) bromide. This ion is predicted to be aromatic by the Hückel Rule.

He called the relationship between color and salt formation halochromy of which malachite green is a prime example.

Carbocations are reactive intermediates in many organic reactions. This idea, first proposed by Julius Stieglitz in 1899 was further developed by Hans Meerwein in his 1922 study of the Wagner-Meerwein rearrangement. Carbocations were also found to be involved in the SN1 reaction, the E1 reaction, and in rearrangement reactions such as the Whitmore 1,2 shift. The chemical establishment was reluctant to accept the notion of a carbocation and for a long time the Journal of the American Chemical Society refused articles that mentioned them.

The first NMR spectrum of a stable carbocation in solution was published by Doering et al. in 1958. It was the heptamethylbenzenonium ion, made by treating hexamethylbenzene with methyl chloride and aluminium chloride. The stable 7-norbornadienyl cation was prepared by Story et al. in 1960 by reacting norbornadienyl chloride with silver tetrafluoroborate in sulfur dioxide at −80 °C. The NMR spectrum established that it was non-classically bridged (the first stable non-classical ion observed).

In 1962, Olah directly observed the tert-butyl carbocation by nuclear magnetic resonance as a stable species on dissolving tert-butyl fluoride in magic acid. The NMR of the norbornyl cation was first reported by Schleyer et al. and it was shown to undergo proton-scrambling over a barrier by Saunders et al.

Order of stability of examples of tertiary (III), secondary (II), and primary (I) alkyl carbocations

In organic chemistry, a carbocation is often the target of nucleophilic attack by nucleophiles like hydroxyl (OH−) ions or halogen ions.

Carbocations undergo rearrangement reactions from less stable structures to equally stable or more stable ones with rate constants in excess of 109/sec. This fact complicates synthetic pathways to many compounds. For example, when 3-pentanol is heated with aqueous HCl, the initially formed 3-pentyl carbocation rearranges to a statistical mixture of the 3-pentyl and 2-pentyl. These cations react with chloride ion to produce about 1/3 3-chloropentane and 2/3 2-chloropentane.

Cyclopropylcarbinyl cations can be studied by NMR:

In the NMR spectrum of a dimethyl derivative, two nonequivalent signals are found for the two methyl groups indicating that the molecular conformation of this cation not perpendicular (as in A) but is bisected (as in B) with the empty p-orbital and the cyclopropyl ring system in the same plane:

In terms of bent bond theory, this preference is explained by assuming favorable orbital overlap between the filled cyclopropane bent bonds and the empty p-orbital.

All content from Kiddle encyclopedia articles (including the article images and facts) can be freely used under Attribution-ShareAlike license, unless stated otherwise. Cite this article:
Carbocation Facts for Kids. Kiddle Encyclopedia.