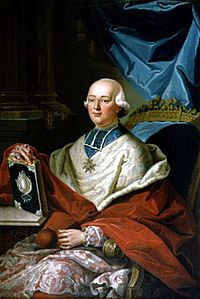 His parents were Hercule Mériadec, Prince of Guéméné and Louise Gabrielle Julie de Rohan. He was born in Paris.

Rohan was made Ambassador to Vienna in 1771. He arrived at Vienna in January 1772, and made a great party of himself. Because of this, Empress Maria Theresa and her daughter, Marie Antoinette did not like him.

He was a key figure of the Affair of the Diamond Necklace. In an attempt to get on Marie Antoinette's good side, he thought that Jeanne de Valois-Saint-Rémy was a friend of the Queen, however not knowing that she lied to him, he was tricked into buying the diamond necklace and giving it to Jeanne.

All content from Kiddle encyclopedia articles (including the article images and facts) can be freely used under Attribution-ShareAlike license, unless stated otherwise. Cite this article:
Cardinal de Rohan Facts for Kids. Kiddle Encyclopedia.