House of Rohan facts for kids 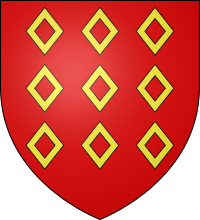 Arms of the family.

The House of Rohan is a French noble family of viscounts, later dukes and princes. They come from the area called Rohan in Brittany. Their line descends from the viscounts of Porhoët. It is said to trace back to the legendary Conan Meriadoc. Through the Porhoët, the Rohan are related to the Dukes of Brittany. They also later developed ties with the French and English royal houses. They played an important role in French and European history.

In France there were generally considered to have been two individual lines, the Princes of Soubise and the Princes of Guéméné. Both had many other titles. Four Archbishops of Strasbourg were members of the family. The Princes of Rochefort descended from the Guéméné line.

The great wealth of the family allowed them to build several palaces and townhouses. They built them in cities and countries in and around Europe. Well known examples of these are:

All content from Kiddle encyclopedia articles (including the article images and facts) can be freely used under Attribution-ShareAlike license, unless stated otherwise. Cite this article:
House of Rohan Facts for Kids. Kiddle Encyclopedia.