Carillon Historical Park is a 65-acre (26.3 ha) park and museum in Dayton, Ohio, which contains historic buildings and exhibits concerning the history of technology and the history of Dayton and its residents from 1796 to the present. The historical elements of the park were the brainchild of Colonel Edward Deeds. The major sections include settlement, transportation, invention, and industry. The park also contains the Carillon Park Railroad, a 7 1⁄2 in (190.5 mm) gauge miniature railway.

The Kettering Family Education Center anchors the park and features changing exhibits in the National City Exhibit Gallery, a video about the park, and gift and snack shops. There are also rooms for education presentations. 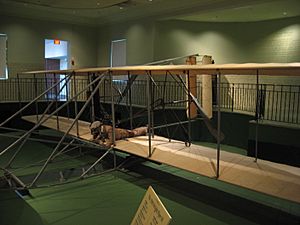 The John W. Berry Sr. Wright Brothers Aviation Center houses the 1905 Wright Flyer III, the world's first practical airplane. The airplane, a unit of Dayton Aviation Heritage National Historical Park, was restored from 1948 to 1950 with the initial consultation of Orville Wright before his 1948 death.

An original lock of the Miami and Erie Canal is located on the grounds, as is a canal toll office. The transportation center vehicles include the John Quincy Adams steam locomotive (built in 1835 by the B&O Railroad and is the oldest US-built locomotive that still exists), a Barney and Smith passenger car built in Dayton, a Conestoga wagon, a 1908 Stoddard-Dayton automobile, a 1915 Xenia cyclecar, an interurban railcar, and other vehicles associated with Dayton. Among the latter, added to the collection in 1988, is a 1949-built Marmon-Herrington trolley bus, which was number 515 in the fleet of the City Transit Company and provided service on the Dayton trolley bus system from 1949 until about 1982. It arrived at the museum in August 1988 and replaced a similar Marmon-Herrington trolley bus, ex-Dayton 501, that had been on display there since April 1988 but was then donated to the Cincinnati Transit Historical Association under an agreement in which Carillon Park received No. 515 from the Miami Valley Regional Transit Authority in exchange. The center also displays the final SUV made at the former General Motors Moraine Assembly, next to the first windshield made by Fuyao Glass America, which redeveloped the factory.

The park is named for the 151-foot-tall (46 m) Deeds Carillon. Colonel Edward Deeds, in whose name the tower was built, was a Dayton industrialist and innovator. The art moderne-style carillon tower was built in 1942 and designed by New York architects Reinhard & Hofmeister. It was funded by Edward Deeds' wife Edith Walton Deeds and was designed to commemorate the Deeds family. When the tower was built, each of 23 bells was inscribed with the name of a family member, with the “silent” bells bearing the names of deceased family members and ringing bells cast with the names of family members then living. Today, with 57 bells, the carillon is Ohio's largest. The National Park Service listed the Deeds Carillon on the National Register of Historic Places in 2005.

Carillon Park refurbished the carillon in 1988, converting it from an electric keyboard controlled instrument to a traditional, baton-keyboard mechanical carillon. The Park's carillonneur, Larry Weinstein performs live carillon concerts every Sunday at 3:00 from May to October.

All content from Kiddle encyclopedia articles (including the article images and facts) can be freely used under Attribution-ShareAlike license, unless stated otherwise. Cite this article:
Carillon Historical Park Facts for Kids. Kiddle Encyclopedia.